The Rumble Stage of the 2021 League of Legends Mid-Season Invitational has begun. Its first day showcased some of the most exciting gaming moments of the tournament so far.

Multiple inter-regional matches were featured on the first day of the MSI Rumble stage, showcasing big global names in League of Legends like DWG KIA, Royal Never Give Up, MAD Lions, and Cloud9.

Though it was a rough day for the North American and Korean Spring champions, the European and Chinese representatives had a brilliant start to the tournament’s second stage.

On pen and paper, RNG had the most challenging fixtures in Round 1 of the Rumble Stage, facing off with two potential MSI 2021 contenders, DWK and C9.

But the Chinese heavyweights silenced all their doubters, winning both games comfortably, each within half an hour of play. RNG’s top laner, Li “Xiaohu” Yuan-Hao, showcased his versatility by scoring a combined scoreline of 4/3/9 with his Gragas and Lucian across two games.

MAD Lions marked their dominance as well by defeating the promising Pentanet and Cloud9 in their first two Rumble Stage matches. With a breathtaking KDA score of 25, MAD’s ADC Matyas “Carzzy” Orsag came out as the show-stealer of the day.

According to fans, Carzzy’s hyper-aggressive playing style could turn out to be a deciding factor for the LEC Spring winners winning their first international League of Legends title.

Here’s how things stand at the end of Rumble Stage Day 1 of League of Legends MSI 2021. 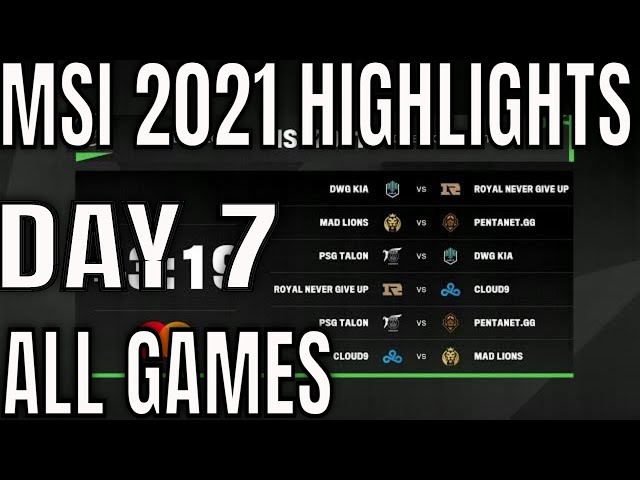 It was a stumbling start for C9 in the MSI Rumble Stage as they lost both Day 1 games against RNG and MAD. Starting from early game miss-outs to late game macro-faults, it was certainly a day to forget for the LCS Spring champions.

In the first game against Royal Never Give Up, the North American representatives started well, winning a couple of early game teamfights.

But ten minutes into play, it was all about RNG’s star top laner Xiaohu, who single-handedly didn’t give any chance for the C9 laners to come back into the game.

Against MAD Lions, Cloud9 fell behind by 8000 gold at just the 15-minutes mark. Following that, the Europeans could never come back into the game, sacrificing their League of Legends nexus to MAD within 30 minutes.

Thus, an uphill task awaits Cloud9 ahead of Rumble Day 2 as they will face DWG KIA and PSG Talon in a do-or-die situation.