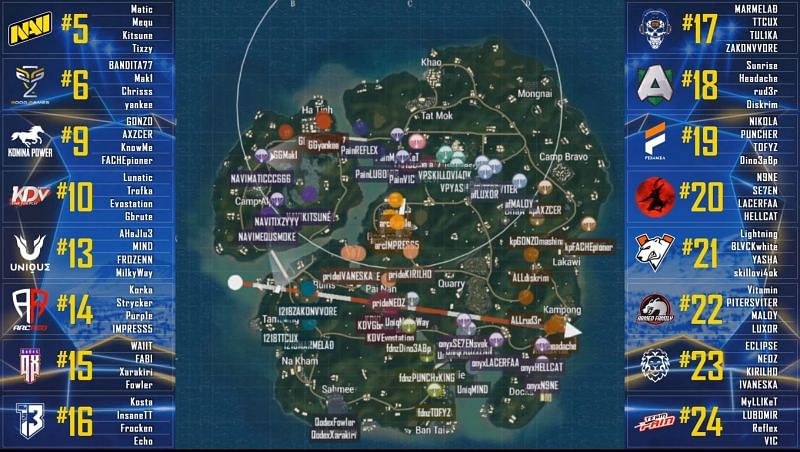 The top 16 qualified teams of the region are competing against each other for the supreme title and $150,000 prize. The top three teams along with Natus Vincere will qualify for the PMPL: EMEA championship.

The first match played on the map Erangel was won by Natus Vincere (Navi) with 12 kills followed by Virtus Pro with 8 frags. Although Team Unique got eliminated early, they still managed to rack up 5 kills. Navi’s Tixzy took 7 kills in the match.

Team 1218 won the second match played on the desert map of Miramar with 13 frags followed by Team Unique and Team Pain with 7 and 8 eight frags respectively.

The third and fourth match played on the maps Sanhok and Erangel were won by Konina Power with 9 eliminations. Virtus Pro secured third place in both the matches while Navi eliminated 8 enemies in the Sanhok match. Qodex took 12 frags in the fourth match securing second place.

The final two matches played on Miramar and Sanhok again were won by Team Onyx with 13 and 6 eliminations. Alliance made a comeback and secured top three positions in both these matches with 4 and 7 frags respectively. Team 1218 was eliminated early from the final match but was able to grab 6 kills.

With only six matches left, it will be interesting to see whether Navi can maintain their pole position or will face retaliation from bottom-ranked teams.