Ebrahim Raisi, who heads Iran’s judiciary, is the clear favourite from an all-male field of seven candidates to replace President Hassan Rouhani, a moderate elected on promises of social and cultural reform. 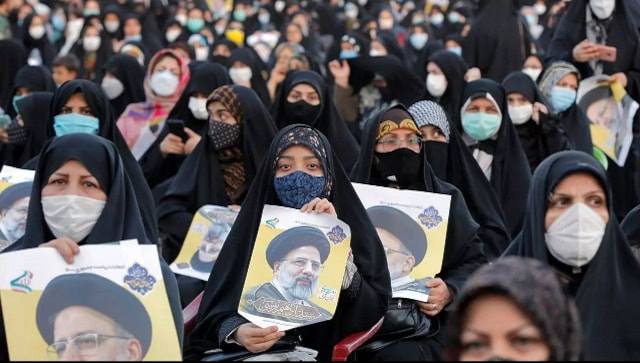 Iranian women’s poor political representation could be set to worsen under an ultraconservative poised to win next week’s presidential election.

Ebrahim Raisi, who heads Iran’s judiciary, is the clear favourite from an all-male field of seven candidates to replace President Hassan Rouhani, a moderate elected on promises of social and cultural reform.

Women’s rights campaigners in Iran have criticised Rouhani for breaking his promises to create a women’s ministry and appoint three female ministers — instead presiding over a decrease in women’s representation over his two terms in office.

Unlike ministerial positions, the posts of vice president do not require parliamentary approval, and critics have accused Rouhani of not daring to submit female ministerial nominations to parliament for approval, even when moderates held a majority.

“The biggest challenge for Iranian women is linked to their total absence from decision-making bodies,” Elaheh Koulaei, a former reformist lawmaker, told AFP.

Women’s representation does not appear to be a priority for any of the seven candidates vying to replace Rouhani on 18 June.

Observers see little difference between pledges from ultraconservative Mohsen Rezai, who has promised to have “at least two women ministers” if he wins, and reformist Abdolnasser Hemmati, who has pledged “at least one”.

But with parliament having the last word, those promises may count for little.

The number of female lawmakers today is just 17 out of 290, compared to four in the parliament elected a year after Iran’s 1979 Islamic revolution, said Zahra Shojaei, an academic who heads the Reformist Women’s Party.

The path towards the recognition of women is “long and difficult”, said Shojaei, who served as reformist president Mohammad Khatami’s counsellor for women’s affairs from 1997 to 2005.

Unless expressly mentioned in marriage contracts, Iranian women must obtain authorisation from their husbands in order to leave the country.

Women are considered to have half the value of men in various legal aspects, such as inheritance and testimony in court.

Headscarves are mandatory in public, and women are subject to various types of discrimination, from not being allowed to attend men’s football matches in stadiums, to being banned from singing solo in front of male or mixed audiences.

But the Islamic republic has also encouraged education for women, who for years now have outnumbered men at universities — a development that has transformed expectations and overturned centuries-old traditions.

“Women have shone everywhere in Iran when they have no obstacles blocking them — namely in education, philanthropy and entrepreneurship,” Shojaei said.

Former lawmaker Koulaei told AFP that “Iranian women have proved they can bring down barriers”.

“We need continuity, stability and the pursuit of efforts that are of course directly linked to the country’s political situation and the process of democratising society,” she added.