Mumbai. Tattoos add to the style statement of many B-town celebs manifold. Not only this, celebs also use it to express their love towards their partner. Now Priyanka Chopra has also made a special tattoo in her body. But, this is not the case for her husband Nick Jonas.

flaunted tattoos
Priyanka Chopra flaunts a new tattoo on her Insta story. Priyanka Chopra’s tattoo is made near the ankle of her foot. In the tattoo, three paws of his pet dogs are made. Along with the photo, Priyanka wrote, ‘Summer Nails… Summer Tattoo’. Let us tell you that Priyanka Chopra and Nick Jonas have a total of three dogs. The names of these three are – Diana, Gino and Panda.

Insta account created in the name of Diana
Priyanka Chopra has also created an account of her pet dog Diana on Instagram in the name of Diary of Diana. Apart from this, she has said on social media that she is the proud mother of her pets. Talking about tattoos, this is the second tattoo in Priyanka’s body. The first tattoo was inscribed by Priyanka Chopra in the memory of her father. He wrote ‘Daddy Little Girl’ on his wrist in memory of his father. 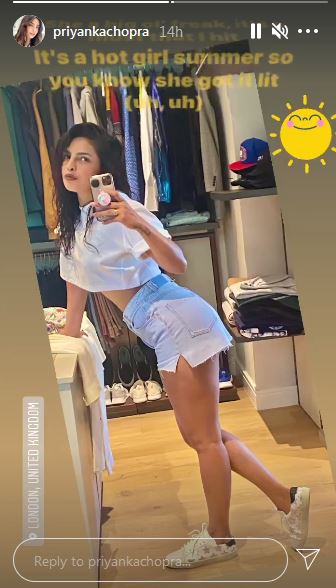 Will be seen in web series
On the work front, Priyanka Chopra was last seen in the Netflix film The White Tiger. Her opposite Rajkumar Rao was in this film. Priyanka was also the producer of this film.

Priyanka Chopra is now going to debut in a web series soon. Priyanka will be seen in Amazon’s web series Citadel. PC is currently shooting it in London.