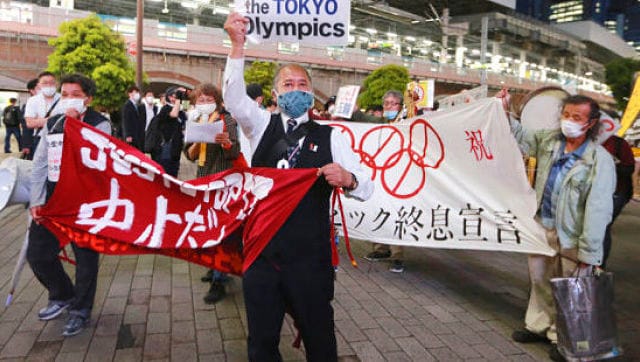 Protests against Tokyo Olympics and why IOC and Japanese government are not keen to cancel Games-Sports News , Technomiz

Tokyo, the host city of the already postponed 2020 Olympics, is in a state of emergency due to the COVID-19 pandemic. Although the numbers are decreasing – average seven-day cases down to 650 on Saturday from 923 a week before, the govt authorities have said it is still not enough to lift the emergency.

Protests in the host city to call off the Olympic Games are not an anomaly. What is happening in Tokyo has happened before, and in fact worse. Take the case of the 1968 Olympics in Mexico City when protests against the Games and the country’s regime eventually turned into a massacre. The Mexican Armed Forces opened fire on unarmed protesters at the Plaza de las Tres Culturas in the Tlatelolco neighbourhood of the city. Those protesting were mostly university students asking for greater democratic rights and better utilisation of resources instead of conducting the Olympics. Around 400 people died on the streets due to the actions of an oppressive government but that didn’t affect the Olympics, which held its opening ceremony just 10 days after the Tlatelolco massacre.

The most recent Olympics in Rio de Janeiro also saw its share of protests due to prevailing political, economic and health situations. As the city was preparing to host a grand party, Brazilian president Dilma Rousseff suffered impeachment due to her party’s involvement in the country’s biggest corruption scandal. Brazil was going through their worst recession in decades and there was a massive health crisis in the form of the Zika epidemic. But the Games happened without any significant complications and it was deemed to be a success although it has earned a questionable legacy.

What is happening in Tokyo and why have people turned against the Games?

Tokyo, the host city of the already postponed 2020 Olympics, is in a state of emergency due to the COVID-19

pandemic. Although the numbers are decreasing – average seven-day cases down to 650 on Saturday from 923 a week before, the govt authorities have said it is still not enough to lift the emergency.

At the moment, the healthcare situation in Tokyo prefecture is not as stretched when compared to other areas but doctors and authorities have issued warnings about the situation with the impending Olympics and Paralympics.

Recently, the Tokyo Medical Practitioners Association, a group of 6,000 physicians, wrote an open letter to Japanese Prime Minister Yoshihide Suga to cancel the Games. “We believe the correct choice is to cancel an event that has the possibility of increasing the numbers of infected people and deaths,” the letter said.

The popularity of the Games among the Japanese people has been falling since the beginning of the year. Various polls conducted in the last few months show the majority want their government to cancel the Games. The Asahi Shimbun daily in their recent survey found more than 80 percent of people opposing the Olympics this year. 43 percent of respondents want the Games to be cancelled while another 40 percent want it to be postponed. Street protests against the Games have been going on in Tokyo while various campaign groups are finding momentum with their anti-Olympic petitions.

Even some of the country’s top businessmen are calling for the cancellation.

The chief executive of Rakuten Group and billionaire Hiroshi Mikitani called the Tokyo Olympics a ‘suicide mission’ during an interview with the CNN. “The fact that we are so late for the vaccination, it’s really dangerous to host the big international event. This is like a suicide mission,” he said.

“I am very much afraid of having the Olympics, not just about Japan but for the many countries. They are having a big, tough situation. I don’t know how they can support sending athletes.” This is after top Japanese athletes like Hideki Matsuyama, Naomi Osaka and Kei Nishikori already raised concerns about the Games.

The prevailing negative sentiment among the majority of the Japanese population towards the mega event is mostly due to dire healthcare situation in prefectures like Osaka and Fukuoka. According to an AP report, hospitals in Osaka are ‘overflowing with coronavirus

patients’. A lot of sick patients don’t even get the chance to get treated in hospitals and ultimately succumb to the disease in their homes.

The vaccination programme in the country did not take off as expected. Since February, only four percent of the country’s population has received at least one dose of Pfizer/BioNTech vaccines. The vaccine is only available for healthcare workers and people who are above 65 years of age. Last Friday, news reports stated that Japan has approved two more COVID-19

vaccines developed by Moderna and AstraZeneca to speed up their sluggish rate.

Maybe the opinion of the Japanese people with regard to the Olympics will change once the vaccination rate picks up and the situation changes in hospitals but it must be remembered that we are just two months from the kick-off.

The International Olympic Committee and the Japanese government are in agreement that the Games will go ahead and it is unlikely they will revert from their present position despite the uproar. IOC chief Thomas Bach repeatedly spoke about conducting a safe and secure Olympics. “For obvious reasons, we cannot give them (athletes) every detail yet, but the most important principle is very clear: the Olympic Village is a safe place and the Olympic and Paralympic Games will be organised in a safe way,” Bach said ahead of a recent meeting between the IOC and organisers.

The IOC has already worked on two editions of ‘Playbook’ – guidelines to conduct the Olympic events in Tokyo and conducted test events earlier this month. Athletes are expected to undergo daily testing for COVID-19

and will remain in a secure bubble consisting of Olympic village, training centres and venues. However, a clear picture on the day-to-day proceedings of the Games is missing for now. The IOC will release the final edition of the playbook in the month of June and also decide on the presence of local fans in the events. The Japanese authorities have already said no to foreign fans during the Games. The International Olympic Committee and the Japanese government are in agreement that the Games will go ahead. AP

Meanwhile, the IOC has also signed a Memorandum of Understanding with Pfizer Inc. and BioNTech SE for the donation of vaccines for participants of the Olympic and Paralympic Games. The IOC said that such deals will allow most athletes and officials to be vaccinated before their arrival in Japan.

Regarding the availability of healthcare workers during the course of the Olympics, local organisers said the Games will need about 10,000 medical personnel, 500 extra nurses and 200 sports medicine specialists. It is extremely tough for Japan to meet the requirements but Bach said the IOC will offer help with added medical personnel when the Games open.

After facing backlash from the opposition and the public, the Japanese PM has said that the government will not put Olympics over the safety of common people but the cancellation of the event is not up to them or the local organising committee. According to the host city contract that Japan signed when they won the bid, it is the IOC who has the power to cancel the Games. In case the Japanese government or the local organising committee unilaterally decide to call off the Games, they could end up in a legal wrangle with IOC with billions at stake.

If both IOC and the host city organisers end up taking the call to cancel the Games, it will lead to a severe financial impact and legal ramifications because both the organisers and IOC have contractual obligations with third parties, like broadcasting companies and other sponsors. It takes a hit on the Olympic ecosystem as well because the IOC derives a major chunk of its revenue by selling television rights – 75 percent and the rest through other sponsorships.

The organisation says 90 percent of the income is invested back in the sports – proceedings given to member organisations as well as future expenses with regard to conducting events. Japan will already miss out on significant revenue because of the ban on foreign fans and they have officially spent $15.4 billion to organise the Olympics, although various audits suggest the figure could be much higher.

To prepare for the worst, the IOC, local organising committee and various broadcasters will be covered by insurance. But again, the specifics of the insurance contracts are not public and it is not clear whether a full force majeure could be invoked on the deals. It is highly unlikely that insurance will also be covering the operating expenses of various parties involved with the Games.

When it comes to athletes, for many, the Olympics are a once-in-a-lifetime opportunity. For athletes in events like boxing, wrestling or shooting, Olympics glory is the ultimate achievement. Cancelling the event will be hard on a lot of them, with decades of hard work going for a toss. Cancelling or postponement might not hurt deeply for tennis or golf players, for whom there will be enough chances in a year to compete and win prestigious event in their respective sports.

The IOC might be afraid that cancelling the Games might set a bad precedent for future events. The Games’ reputation has already taken a beating in recent times. Many cities have been prematurely aborting their bids to host Summer and Winter Games. One of the major reasons for cities not showing interest to host prestigious events, as mentioned in this article, is cost overruns. The cities in both developed and developing nations usually end up in huge debts and dilapidated infrastructure once the Games are over. Once seen as a matter of pride for people in host cities, the Olympic Games, for many, are now a symbol of the exploitation of resources.