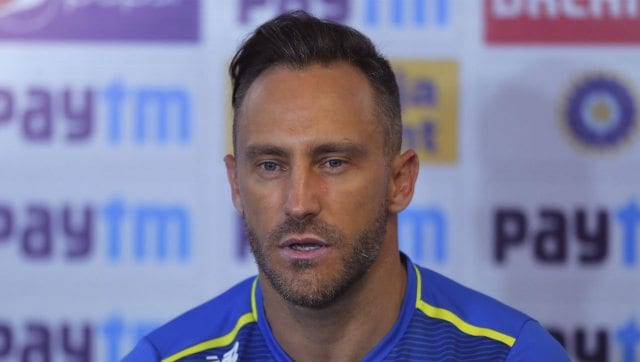 Faf du Plessis had to be taken to hospital after colliding with a Quetta Gladiators’ teammate during their Pakistan Super League (PSL) 2021 match against against Peshawar Zalmi in Abu Dhabi on Saturday.

Du Plessis suffered a blow to his head when he dived near the boundary to stop the ball, but came in contact with Mohammad Hasnain’s knee and stayed on the ground. The incident took place in the seventh over of Peshawar Zalmi’s innings when David Miller drove Mohammad Nawaz down the ground.

After on-field medical help, Du Plessis got up and walked back to the dressing room. He was later taken to the hospital for further examinations. The team used a concussion substitution to replace Du Plessis with Saim Ayub coming into the XI.

Quetta Gladiators used a concussion substitute for the second time is as many matches. On Friday, Andre Russell was hit on the helmet and had to be taken to the hospital. He was later replaced by pacer Naseem Shah. Russell had to miss the match against Zalmi on Saturday.

BREAKING – Faf du Plessis has been sent to hospital for a check-up after he collided with Mohammad Hasnain while fielding in PSL game.#FafduPlessis #PSL pic.twitter.com/RnT9sCPDkz