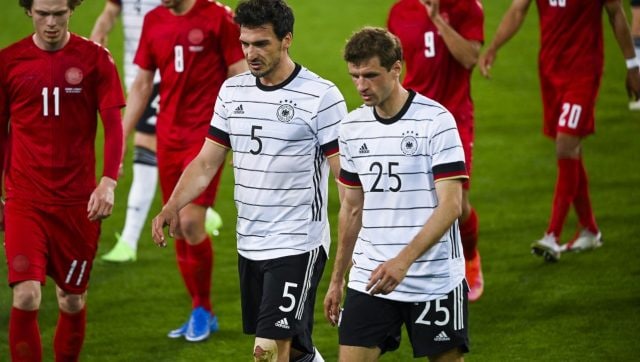 After a two-year exile from international football, Thomas Mueller and Mats Hummels are set to crank up the volume on the pitch for Germany’s bid to win Euro 2020.

Thomas Mueller and Mats Hummels are back in Germany team after a gap of two years. AFP

After a two-year exile from international football, 2014 World Cup winners Thomas Mueller and Mats Hummels are set to crank up the volume on the pitch for Germany’s bid to win Euro 2020.

Germany head into the European Championship low on confidence after a shock home defeat to North Macedonia in March in the wake of an historic 6-0 thrashing by Spain last November, the Germans heaviest defeat in more than 80 years.

On both occasions, shell-shocked faces in the stunned German ranks exposed a lack of leadership with captain Manuel Neuer helplessly watching the crisis unfold from his goal.

Germany’s under-fire head coach Joachim Loew, who will step down later this summer, has reacted by reversing his 2019 decision to axe Hummels and Mueller, recalling the experienced pair to help lead on the pitch at the Euro.

“It’s certainly true that Mats Hummels or myself are players who dare to speak up,” said Mueller, who made his 101st international appearance on Wednesday after a two-year hiatus.

Loew is desperate to sign off after 15 years in charge by winning the Euro to mend his reputation, tarnished by the Germans’ 2018 World Cup debacle, and needs Mueller, 31, and Hummels, 32, to give his squad a boost.

As Germany left-back Robin Gosens admits “both have a special aura. You notice immediately that you can rely on these guys. And that feeling is enormously important for a football team.”

Equally, a poll of German fans by AFP subsidiary SID showed more than 80 percent are pleased to see Mueller and Hummels back on Germany duty.

‘Radio Mueller’, as he is nicknamed, was the loudest German voice on the pitch in Wednesday’s 1-1 draw with Denmark while Hummels marshalled the German defence, but his last-gasp tackle could not stop Yussuf Poulsen’s equaliser.

“It’s not about roaring or volume per se,” explained Mueller.

“The point is to distribute information so that every player can react as quickly as possible to game situations. I am what I am.”

“When I see the quality that is in the team, I want to wake up German football,” he added.

There is no way of hitting the snooze button on Mueller, who wants to fire up Germany’s bid to be crowned European champions for the fourth time.

However, the Germans will have to be wide awake to survive Group F.

They start against world champions France on June 15 in Munich, then face holders Portugal four days later before hosting Hungary on June 23.

“We will have moments of suffering — the group won’t be a walk in the park,” Mueller admits.

Likewise, Hummels only wants to enhance Germany’s leadership group and is wary of disturbing the fragile harmony within the team.

“Thomas and I bring additional support. We don’t want to take a (leadership) role away from anyone. It’s not a problem, because we all want to win.”

The veterans have earned their recalls on merit.

Hummels was the defensive cornerstone of a Dortmund team which won all of their last eight games to qualify for the Champions League and lift the German Cup.

Mueller has not looked back since Hansi Flick recalled the attacking midfielder to the Bayern Munich starting side in November 2019.

“Hansi gave me responsibility and you have to back that up with performances,” said Mueller.

His eye for space in the penalty area helped create many a goal as Bayern swept up the 2019/20 treble of Champions League, Bundesliga and German Cup titles.

His form this season has also made a mockery of Loew’s decision to axe him and despite 926 days in exile, Mueller and Hummels looked like they had never been away against the Danes.