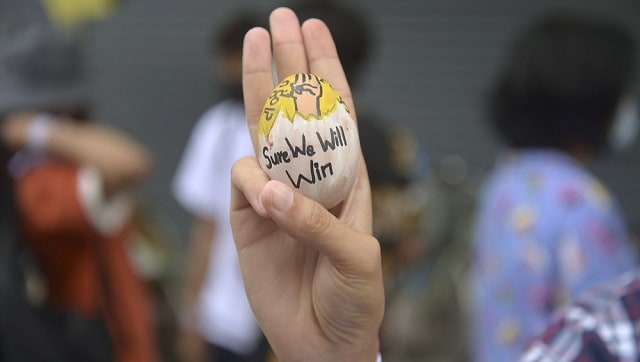 Before he was killed, Khet Thi’s poems railed eloquently against Myanmar’s sudden coup, joining a deluge of protest verse celebrating democracy demonstrators and defying the military’s brutal war on words.

As soldiers unleashed a violent crackdown on resistance to the army takeover, he implored the public to stand firm against what he saw as an existential threat to the country’s future.

“We have to fight to win this battle,” he wrote. “If we lose: North Korea. If we win: South Korea.”

Last month, scores of police and soldiers surrounded the home he shared with his wife and family in the central city of Shwebo.

They accused the poet — who baked cakes and made ice cream to support his family — of planning a series of bomb blasts, and demanded he give himself up.

The next day his wife Chaw Su was summoned to a hospital in Monywa around 80 kilometres (50 miles) away.

“I thought I would able to (bring) him some clothes,” she told AFP.

But there was no need, according to a police officer, who told Chaw Su her husband was dead.

“I got only the dead body back,” she told AFP.

Myanmar has been in uproar since the February coup ended a 10-year experiment with democracy that had loosened the fetters of censorship and allowed for greater self-expression.

As some protesters picked up hunting rifles and slingshots, poets like Khet Thi joined a fight against the coup staged by a population unwilling to surrender hard-won democratic freedoms.

Along with violence in the streets, the junta has tried to stifle dissent with internet blackouts and by rounding up celebrities and civil servants who have called for rebellion.

A video uploaded to Facebook soon in the weeks after the putsch showed a collage of defiant protesters reciting poems against the military.

“With what conscience can you go to work while everyone goes out and protests?” asked one man, referring to a mass strike campaign launched to pressure the junta.

Poetry played a prominent role in Burma’s struggle for independence against colonial power Britain and the decades of military rule that followed, when scores of writers were locked up as political prisoners.

UK-based poet Ko Ko Thett believes the medium has struck a chord with ordinary people “overwhelmed with rage, disbelief and grief” at the junta’s takeover.

He put his own writing on the back burner in order to concentrate on translating works by fellow poets writing from post-coup Myanmar — some of whom, like Khet Thi, have since been killed.

Among them were Myint Myint Zin and K Za Win, both teachers, who died during a ferocious military assault on protesters in Monywa.

Many have mobilised online in their battle against the junta, including an underground collective of 30 bards from across the country spreading their verse on Facebook.

“There is so much crime against humanity (in Myanmar). Poets in such situations live with tears in every single breath,” one poet, who asked to remain anonymous for security concerns, told AFP.

“Our poems are hordes of screaming children.”

Ko Ko Thett said he was “numb with grief” over the deaths of his fellow poets.

All of them “should have been noted for their poetry (but) got noted in the international media only after they got killed,” he said.

Khet Thi, the poet abducted in Shwebo, composed a verse two weeks after the coup to declare that he didn’t want to be a martyr or hero.

“I do not want to be a supporter of (the junta’s) violence,” he wrote.

“If there is only one minute left to survive I want to have a clear conscience even for that minute.”