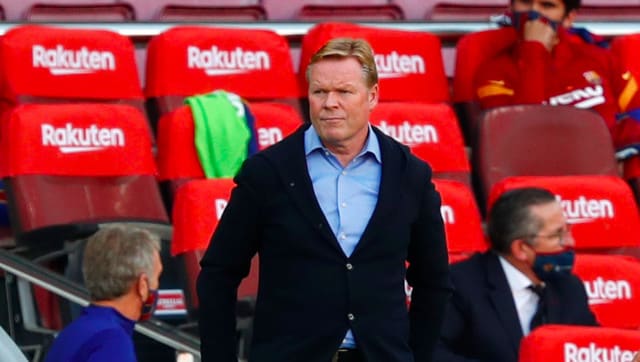 ‘It’s not in our hands, but if we don’t make any more mistakes we will put pressure on the others,’ Koeman told a press conference ahead of a game against Levante on Tuesday. Barcelona: FC Barcelona “still believe” they can win LaLiga, said coach Ronald Koeman on Monday following a weekend when they were held at home by leaders Atletico Madrid.

Barcelona could have moved to the top of the table, but the goalless draw on Saturday left them third, two points behind Atletico, and also trailing Real Madrid with three games to go.

“It’s not in our hands, but if we don’t make any more mistakes we will put pressure on the others,” Koeman told a press conference ahead of a game against Levante on Tuesday.

“We will do everything to win until the last second.

“The team that is mentally and physically the strongest will surely be the one to win, but I think all the teams are coming to the finish a little weakened.”

Koeman, who took over last August, said he expects to be in charge next season.

“I have two years left on my contract and I see myself as coach next year,” said the Dutchman.

Since then Joan Laporta has replaced previous president Josep Maria Bartomeu at the head of the club.

“The president has shown me his confidence,” Koeman said, adding that he would prefer to wait until the end of the season before talking about his future.

Koeman said he was in no position to comment on possible sanctions from UEFA for Barca who, along with Real Madrid and Juventus, have refused to renounce their Super League project.

“I was not involved in the Super League issue, I was not with UEFA, it is a UEFA case and I don’t know whether or not UEFA is capable of imposing sanctions, but at the moment I am not interested in it either,” he said.