Discussions of scams in recruitment are often seen and heard, but for the last few years, the process of applying under fake names has also started. Sometimes someone is applying in the name of an actor and some of the actress. Now a strange case has come to the fore in Chhattisgarh, in which former Indian captain and veteran wicket-keeper batsman Mahendra Singh Dhoni has applied for the job of a teacher. Not only this, the name of the father of the applicant Dhoni is Sachin Tendulkar. However, the most surprising thing is that the applicant was also shortlisted for the interview.

Such a fake application was exposed

Applications have been invited for the recruitment of teachers in Chhattisgarh. Mahendra Singh Dhoni also applied for the post of teacher in the capital Raipur. 15 applicants were to be interviewed on Friday. Dhoni’s name was also in this list. In such a situation, when the applicant did not reach Dhoni, the matter came to light. The officials got suspicious and tried calling the number on the application but there was no communication. At the same time, now there is talk of registering an FIR against the fake applicant. 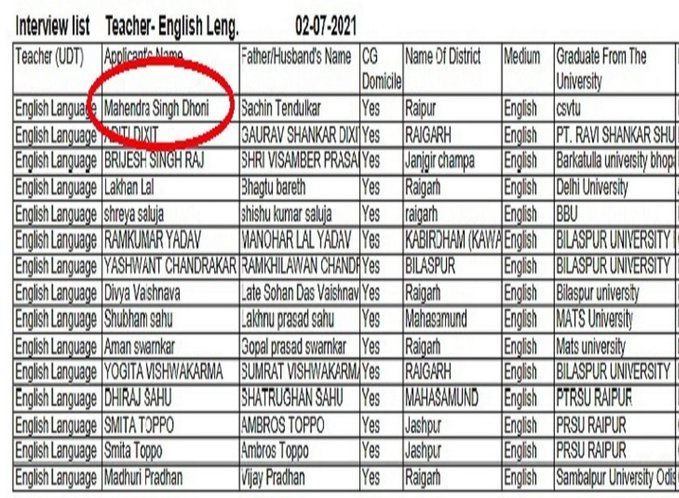 As per the application, Dhoni holds an engineering degree from Durg CSVTU University. The officials responsible for the selection process have confirmed the fake application. However, no one explained how the fake applicant was shortlisted for the interview. Significantly, the applicant Dhoni is making a lot of headlines on social media. Many users are expressing concern and some are sharing memes.