In a conversation with Times of India, Yami Malhotra said, ‘When I sat in the car, I saw a fire coming out of the bonnet of the car. By the time I could understand something, the fire had spread. Yami Malhotra writes in her Insta story, ‘Neither asks nor tells you before bad times come. It will just come with a jolt. Few seconds change the whole situation of your life. So be afraid of the one above.’ 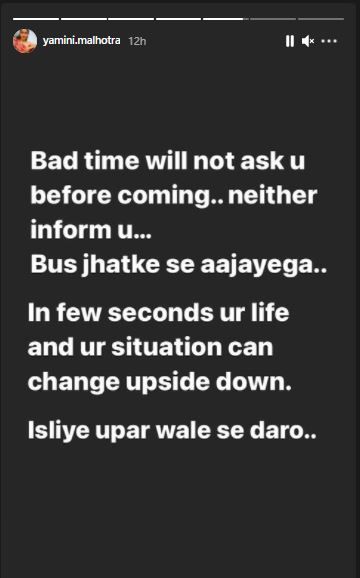 Priyank Sharma-Divya Agarwal patch up
Bigg Boss 15 OTT contestant Divya Aggarwal told that her ex-boyfriend Priyank Sharma has been patched up. In an interview to Times of India before going into the house, Divya Aggarwal had said that she and Priyank have become friends. Not only this, Priyank has also given him tips to make his game in Bigg Boss house. Priyank was seen in season 11. Pooja Gaur gets emotional after Anupam Shyam’s death
TV serial Pratigya’s actor Anupam Shyam has passed away at the age of 63. Actress Pooja Gaur, who played his daughter-in-law in the serial, has also written an emotional post on the death of Anupam Shyam.

Pooja writes, ‘I will be forever grateful for the way you took me under your shelter, taught me the correct pronunciation of words, as a teacher, guided me towards a successful path.’