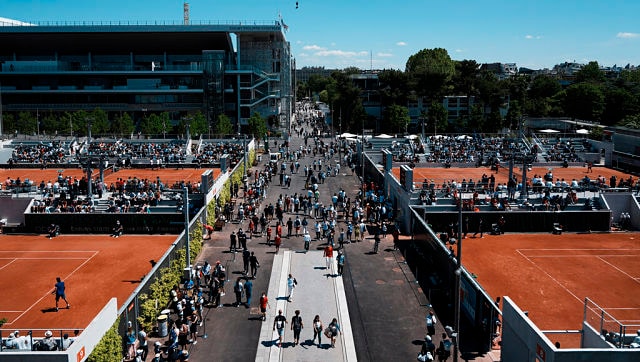 With more fans and May weather, Roland Garros is closer to normal-Sports News , Technomiz

Still not quite its packed, pre-pandemic self, Roland Garros bubbled with tennis, cheers and sun-kissed pleasures again on Sunday as this year’s tournament began with some colour back in its cheeks compared to the bland edition held in the autumnal chill last year. Visitors stroll in the alleys of the Roland Garros stadium during the French Open tennis tournament on Sunday. AP Photo

Still not quite its packed, pre-pandemic self, Roland Garros bubbled with tennis, cheers and sun-kissed pleasures again on Sunday as this year’s tournament began with some colour back in its cheeks compared to the bland edition held in the autumnal chill last year.

Nearly 5,400 people per day are allowed on-site at the outset of the French Open, with expectations of even more allowed in at the tail end of the tournament, after the 2020 version was limited to 1,000 spectators daily when it started in September due to COVID-19

Courts that last year rang hollow and empty now echoed with chants and applause, especially the smaller courts that, because of their limited capacity, felt almost crowded — even with some seats marked as unavailable with red stickers asking that they not be used because of health reasons.

Spectators again formed lines, whereas last year they’d been able to waltz right in and pretty much sit where they wanted.

Christian Noel, who took two weeks of vacation from his job in insurance to attend the French Open for 10 days, reveled in being back at the venue. Wearing a face mask, as required for all spectators aged 12 and over except while eating or drinking, he soaked up play on Court 8, newly opened this year.

“I’m delighted,” he said. “I really missed it last year.”

Waiting in line to get into another new, small court, Court 6, actually was a joy to Matthieu Cassot, a financial comptroller from the Paris region. He was among the lucky few who managed to get tickets in 2020, attending twice, an experience he found “quite sad.”

“It’s doing me the power of good,” he said of Sunday’s livelier atmosphere. “The pleasure of seeing people and the pleasure of all being back together again.”

The larger show courts, of course, were more noticeably empty, because of so many thousands of still-vacant seats.

Last year, kiosks were closed, so those who were on site had very little to spend their cash on.

Now, though, they once again were tempted by souvenirs, snacks and drinks to sip. The sun warmed a new 10-foot statue of 13-time champion Rafael Nadal and people who took in the rays, unlike all of the shivering in coats and jumpers of seven-plus months ago.

Pamela Murphy, a doctor from New York, said she paid three times their value for tickets she bought for Sunday.

In Paris to consult with French colleagues about the coronavirus

, she savoured pink Champagne — 100 euros, or about $120, a bottle — with a friend outside Court Philippe Chatrier.

“They put up the umbrella for me and set up the table,” she said. “The French are so lovely.”