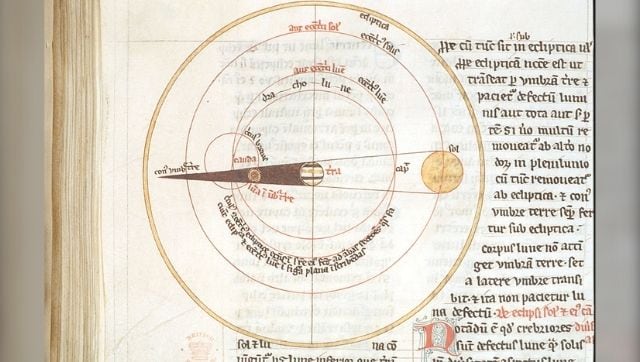 A sign from God or a scientific phenomenon?-Art-and-culture News , Technomiz

There are numerous surviving scientific discussions of eclipses written by Christians from across the medieval period. An eclipse of the moon as illustrated in a 13th-century English manuscript. British Library, Harley 3735, f. 81v. British Library Catalogue of Illuminated Manuscripts via The Conversation

A total eclipse of a super blood moon will be visible in Australia for around 15 minutes tomorrow evening, and it promises to be spectacular.

During a lunar eclipse, the Earth passes directly in between the Sun and the Moon and the Moon appears to glow red, reflecting only the light that travels through the Earth’s atmosphere.

Humans have known the scientific cause of this phenomenon for millennia. As early as 3,000 years ago, the Babylonians were keeping records of the movements of the celestial bodies on clay tablets, calculating the date and time of future eclipses.

While it is often assumed that the Middle Ages was a time of ignorance and superstition, the truth of medieval Christian understandings of lunar eclipses is much more complex.

From ancient Greece to medieval Europe

There are numerous surviving scientific discussions of eclipses written by Christians from across the medieval period.

In the 7th century, St Isidore of Seville explained in his encyclopedic Etymologies a lunar eclipse occurs when the Moon, not having its own light, moves into the shadow of the Earth. He also knew lunar eclipses could only occur on the 15th lunar day as they happen only when the moon is full.

Isidore drew on classical sources that translated the theories of ancient Greek astronomers into Latin, the language of the medieval Church in western Europe. The monk Richard of Devizes, considering a solar eclipse seen in England on June 23, 1191, recorded that witnesses who didn’t understand the science of such things wondered what it might portend, while those who studied the world and its workings knew perfectly well that such lunar and solar phenomena are not omens.

In the 12th century, the translation of more Greek, Arabic and Hebrew scientific works into Latin introduced a new wave of natural philosophical material to European Christians.

Even when there was a scientific understanding of the eclipse, however, it was believed to have been caused by God.

As was written in the Bible:

Eclipses — being caused by natural processes set in motion by God at the Creation — could be understood to signify future or otherwise distant events. The Latin Christian sources for the crusades are especially rich in the discussion of celestial phenomena. Western Christians believed the crusaders were fulfilling God’s will, or even contributing to the advent of the apocalypse, and celestial events were seen as a form of communication from God.

In his account of the First Crusade (1096–1101), Albert of Aachen describes how the crusaders witnessed a blood red moon as they drew closer to the city of Jerusalem. Those who had knowledge about the eclipse as a signal of God’s will, Albert tells us, comforted the fearful.

According to the Annals of Magdeburg, when an eclipse transformed the sun into the shape of a sickle in October 1147 and cast a terrible darkness across the land, witnesses saw it as a sign that a time of bloodshed was upon them.

The 12th-century polymath John of Salisbury issued a warning against the practice of astrology and horoscopy, which he lumped together with fortune telling, soothsaying, and other “unsavoury” practices.

John knew lunar eclipses were caused by the Earth obscuring the Moon. He accepted there was merit in the study of astronomy when it was understood these phenomena could be signs from God, but believed people crossed the line when they thought the celestial bodies had their own power to influence the world.

By granting the celestial bodies their own power, John said, people were detracting from the power of God.

Not an age of ignorance

While scientific explanations were increasingly available to educated, literate ecclesiastes and some (probably aristocratic) laypeople, it is not clear how far these ideas circulated among the broader population.

In an early 11th-century chronicle, Bishop Thietmar of Merseburg advised all Christians that eclipses were not caused by evil incantations or the celestial bodies being eaten, and they were powerless to bring an eclipse to an end by their actions.

This has been cited as evidence that some people believed that lunar eclipses were caused by magicians or moon-hungry monsters.

However, it is important to remember this comes from a source written by an educated churchman who may have exaggerated evidence of superstitious beliefs in order to then condemn them.

Yet even if we allow for these beliefs, the range of ideas surrounding lunar eclipses in medieval Europe reveal it was not the dark age of superstition and ignorance it is often assumed to have been.

Beth Spacey, is a Postdoctoral Research Fellow in Medieval History, at The University of Queensland