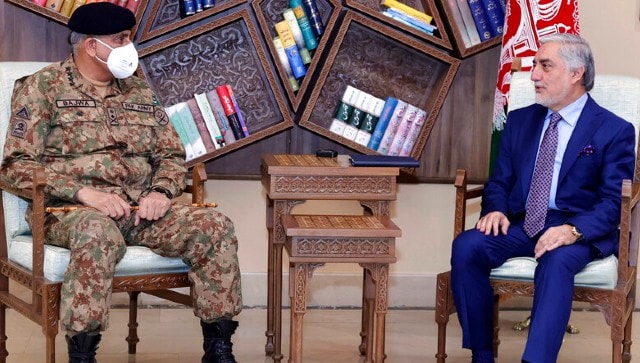 As US readies to exit Afghanistan, India-Pakistan proxy war likely to be last thing on General Bajwa’s mind-India News , Technomiz

Any instability following the American withdrawal from Afghanistan is sure to trigger further waves of instability in Pakistan’s notorious tribal belt, and even mainstream provinces

As American troops from Afghanistan are beginning to pack their bags after US President Joe Biden announced that all US forces will leave Afghanistan by 11 September, 2021, Pakistan’s Army Chief, General Qamar Javed Bajwa, went to Kabul to reassure the Afghan political leadership of his country’s support for the Afghan peace process.

Afghanistan has undoubtedly entered into a new, uncertain and more troubled phase of its life as a nation-state. The approaching destabilisation is not entirely a new phenomenon; the security spillover effects generated by the two decades of the Taliban-dictated conflict could not be solved by Washington. Having failed to produce the desired outcomes in Afghanistan through military means, Biden has now decided to terminate the effort itself and called on regional countries, particularly Pakistan, to do more to support Afghanistan achieve stability.

Pakistan is the most important player in the Afghan conflict. If former US president Donald Trump wanted Pakistan to push the Taliban to sign a face-saving exit deal with the US, the generals in Rawalpindi have not disappointed Washington. After months of negotiations, the deal was eventually signed last year in February. Biden has also decided to continue chasing peace with the Taliban. It is another matter that he has set no timelines, and seems ready to leave Afghanistan irrespective of what kind of governing system emerges in Kabul on the eve of two decades of 9/11 attacks.

Pakistan’s army chiefs have always attempted to transfer foreign policy from the realm of low politics to the one of high policy as it has allowed them to hog the limelight in Western capitals and call the shots back home. Although the interests of Pakistan army fluctuate depending on how their chiefs perceive their relationship vis-à-vis the elected government in Islamabad, one could argue that Bajwa has made some notable attempts — in a region which constitute Afghanistan and India, and invariably regarded as high politics — to adopt a more cautious or post-ideological approach to foreign policy.

Not long ago, he tried to bring an element of pragmatic sanity to Pakistan’s discredited India policy, but ultimately failed due to stiff resistance from a dominant section within the army. And recently, it was mostly due to Bajwa’s back-channel diplomatic efforts which saw Imran Khan being received by Saudi Crown Prince Mohammed bin Salman, bringing some normalcy to Pakistan’s fractured ties with Saudi Arabia.

Given an opportunity to decide, both India and Pakistan would have liked to see the American troops to stay more in Afghanistan, obviously for different reasons. In a recent column, C Raja Mohan rightly observes: “For Delhi, American military presence would have kept a check on extremist forces and created conducive conditions for an Indian role in Afghanistan. For Rawalpindi, American military presence in Afghanistan keeps the US utterly dependent on Pakistan for geographic access and operational support. And that dependence, in turn, could be mobilised against India.”

At the most fundamental level, the US exit has become essential because the American way of thinking about how to resolve the Afghan conflict had largely become ossified. A US flag is lowered as American and Afghan soldiers attend a handover ceremony from the US Army to the Afghan National Army, at Camp Anthonic in Helmand province of southern Afghanistan. AP

Furthermore, it had become unimaginative, too reliant on outdated approaches, and overlooked the all-important dimension of how to prevent Pakistan from exploiting its golden leverage – the Taliban safe havens inside its territory. Bajwa should know that Pakistan has already extracted maximum strategic benefits arising out of two decades of American presence in Afghanistan, and now the business has gone bust.

Any instability following the American withdrawal is sure to trigger further waves of instability in Pakistan’s notorious tribal belt, and even mainstream provinces where sectarianism has come to sweep a large number of unemployed and enraged youth.

As manifested by the Tehreek-e-Labbaik Pakistan (TLP), Pakistan’s radical right-wing entrepreneurs are now actively pursuing political objectives by mobilising, provoking and adding to the violent expression of sectarian identities.

There are already growing concerns about the lack of ability of Afghan troops to keep the Taliban at bay without air support of the US forces. Whether we believe it or not, the possibility of a stable Afghanistan under the Afghan security forces with a capacity to fend off insurgents seems very remote at the moment.

As the war-torn country looks set to plunge into a protracted civil war between the Afghan government and the Afghan Taliban, the ensuing violence and flow of refugees will not leave Pakistan untouched. General Bajwa, who has to shoulder the invisible but onerous responsibility of managing the inherent contradictions of running the Pakistan Tehreek-e-Insaf (PTI) government led by Imran Khan, cannot remain oblivious to this looming threat.

General Bajwa is a kind of military commander who is likely to believe that he possesses enough political acumen to make decisions which, if not always right, are at least not too far wrong. Though, some of the maverick Pakistani strategists of jihadist ilk might also be thinking about the mass desertions by Afghan military personnel in case of an ultimate fall of Kabul, Bajwa cannot forget that a state collapse in Afghanistan has some major consequences that Pakistan cannot avoid without American support, which is no longer available. However, if the Afghan peace process completely falls apart, even Rawalpindi will have little option but to resume supporting the Taliban to hedge its bets.

What’s in it for India?

Pakistan’s key aim in Afghanistan has been to counter India’s presence in Afghanistan with the help of Islamist insurgents – the Afghan Taliban and the Haqqani Network. And Pakistan’s security establishment has continued supporting them despite their country paying exorbitantly high price, both economically and culturally. That is why Pakistan’s role in a post-withdrawal Afghanistan will be determined by how the Afghan peace process unfolds.

But the failure of the Afghan peace talks would allow Pakistan to fall back on its most trusted proxies. This would come with certain costs for India. Islamabad would not hesitate in providing the Afghan Taliban with the vital support against India, and this will directly challenge India’s political, security, and economic interests in Afghanistan.

Clearly, stakes are very high for New Delhi which has enjoyed excellent bilateral ties with the Kabul government. Afghanistan is one of the key regional countries that have been a steadfast Indian ally, and that has been one of the main reasons of New Delhi always maintaining that it will not support a Taliban-dominated government in Kabul. This stand was repeated in a 4 May joint India-EU press statement on Afghanistan.

New Delhi recognises the importance of the success of intra-Afghan talks which are being held for an inclusive and acceptable power-sharing arrangement. Given India’s largely positive image among the ordinary Afghans, any regime in Kabul that emerges following a power sharing arrangement is most likely to continue engaging with India, particularly at developmental and diplomatic levels. One of the most important reasons is the legitimacy it will bring to them; India is the only country that has so far avoided recognising the Taliban.

However, India is also advised to reactivate its old links in the Northern Alliance besides exploring the possibilities of forging links with amenable sections of the Afghan Taliban. The biggest headache for India is that the military elimination of Afghan political alternative to the Taliban will only fuel the rise of Islamist politics across the region, and it would be foolish to believe that Kashmir could somehow be kept aloof from this irrational tide.

In the absence of America’s military presence, the Afghan reconciliation talks are going to reconfigure the political and strategic horizons of the unstable region and will certainly initiate the reorientation of Pakistan’s military-diplomatic posture toward the US with which it has maintained a love-hate relationship. As Islamabad is taking steps to rejuvenate its regional ties for greater strategic and manoeuvrability, it is important to see as to how Beijing would be viewing these developments.

There has been a certain cavalier tendency among some analysts to view the Afghan conflict as essentially a violent extension of the competitive side of India-Pakistan relations. As such, warring parties are seen acting aggressively to achieve control over the situation or over each other in Afghanistan. While there might be an element of truth in it, nonetheless it is irresponsible and simplistic assessment of the Afghan situation. Therefore, the proxy war between India and Pakistan in Afghanistan is probably the least what Bajwa is thinking about.