Biden-Putin summit begins with chaos as reporters shout, attempt to shove their way in 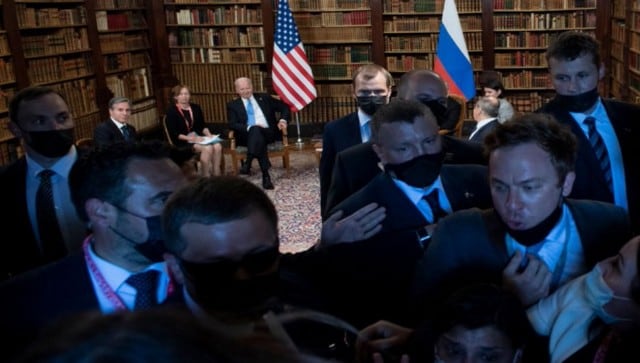 Scene from the fracas at the Biden-Putin summit in Geneva. Image courtesy: @JonLemire

President Joe Biden’s summit with Russian President Vladimir Putin began with minutes of unusually fierce shoving and shouting among US and Russian journalists and security forces.

Scene from the fracas earlier at the Biden-Putin summit here in Geneva, with Russian security forces pushing me out while President Biden looks on

Organisers at Wednesday’s summit in Geneva opened the meeting room to journalists for what’s normally a few minutes of news media filming and shouting questions before talks start.

On Wednesday, however, Russian and US security forces and officials initially blocked journalists as they tried to enter the room.

The scene then devolved into minutes of chaos inside the meeting room.

American journalists described Russian security and news media grabbing them by the arms and clothes to try to hold them back.

US journalists tried to shoulder their way in, and a US reporter was knocked to the ground.

Before the scene calmed, some in the crowd shouted they were being crushed in the melee.

Biden and Putin initially sat awkwardly in front of the press, but then watched and at times laughed at the tumult.