Mumbai. The trailer of Ajay Devgan’s film Bhuj The Pride of India has been released. The trailer is getting a tremendous response on YouTube. On the other hand, the film Devdas has completed 19 years. At the same time, Saif and Kareena are getting trolled once again regarding the name of the son. Know today’s five big Bollywood news.

Aamir Khan is currently shooting for the film Lal Singh Chaddha in Ladakh. Locals have alleged that Aamir Khan and his team are spreading pollution. A user has shared the video on social media. Along with the video, the user wrote, ‘This gift for the people of Ladakh from Bollywood star Aamir Khan’s film Lal Singh Chaddha. Aamir talks on the cleanliness of the environment in Satyamev Jayate but it happens when it comes to himself.

Geeta Basra shared the video
Actress and Harbhajan Singh’s wife Geeta Basra has become a mother for the second time. After the birth of the son, Geeta Basra has shared a video on social media. Geeta has expressed her gratitude for all the well wishes in the video. Geeta wrote in the caption accompanying the video, ‘It is wonderful to hold small hands. Our life is complete. Thanks to all the fans for blessing us with a healthy baby boy.

Kareena Kapoor trolled in the name of son
Kareena Kapoor’s son father Randhir Kapoor told that his grandson and Saifina’s son’s name is Jeh. Kareena Kapoor is once again on the target of trollers because of her son’s name. Trollers say that Saif and Kareena wanted to name their son Jahangir but shortened him to Jeh. Let us tell you that Jeh is a Parsi name. It means ‘come’. It is a symbol of positivity. 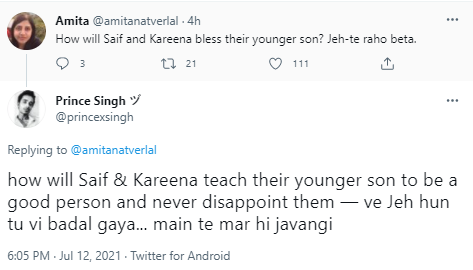 19 years of Devdas
Shahrukh Khan, Madhuri Dixit, Aishwarya Rai’s film Devdas has completed 19 years. Directed by Sanjay Leela Bhansali, the film earned a lot at the box office. On the occasion of completion of 19 years of the film, Shahrukh Khan told that during the shooting of the film, his dhoti used to open again and again. Madhuri Dixit, Aishwarya Rai, Jackie Shroff, Kirron Kher solved all the problems late night and early morning.

Bhuj The Pride Of India trailer released
The trailer of the film Bhuj The Pride of India has been released. The story of the film is based on the 1971 Indo-Pak war. Ajay Devgan, Sonakshi Sinha, Praneeta Subhash, Sanjay Dutt, Nora Fatehi and Sharad Kelkar are in important roles in the film.