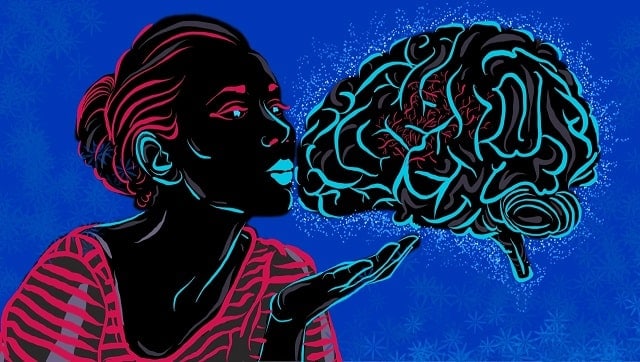 Often dismissed as being “part and parcel of being a woman” or simply brushed aside as being “just PMS”, Premenstrual Dysphoric Disorder (PMDD) lies at the intersection of two deeply stigmatised issues in India — menstruation and mental health.

“If the entire world is uncertain about its future, then why are we even here? What is the point?”

Namrata Menon, a 24-year-old editor, was engulfed by existential dread during the nation-wide lockdown to battle the coronavirus

in 2020. They were scared — the lockdown had amplified feelings of paranoia and anxiety, brought on by Premenstrual Dysphoric Disorder (PMDD).

Globally, PMDD can affect 1 in 20 women. But few are aware of its existence, and fewer still receive a diagnosis. While there has been discussion about the pandemic’s impact on women and people with periods, with an exponential increase in irregular cycles and stress-induced PMS symptoms, for people like Namrata, who are living with PMDD, the pandemic brought with it an additional reckoning in terms of their physical and mental wellness. With the second wave of the virus wreaking havoc in India, it is essential to address its impact on our mental health and, therefore, how disorders such as PMDD — that can intensify due to stress — may manifest in the months to come.

Often dismissed as being “part and parcel of being a woman” or simply brushed aside as being “just PMS”, PMDD lies at the intersection of two deeply stigmatised issues in India — menstruation and mental health. Being diagnosed with PMDD, even today, remains a privilege due to the stark lack of information in the country. The Mayo Clinic describes PMDD as “a severe, sometimes disabling extension of premenstrual syndrome (PMS)” and the blurred line between these disorders is often cited as a key factor in what prevents accurate and timely diagnosis.

This explanation, though simple, leaves out more serious elements of what makes the disorder so debilitating. PMDD can manifest through both physical and mood symptoms, ranging from breast tenderness, bloating, and extreme cramps to depression, anxiety, and even suicidal ideation. There is, in fact, a clear distinction between the disorder and PMS: as M*, who has been living with PMDD since 2016, described it, “The “dysphoria” — the profound unhappiness or unease — is what really stands out, and it’s important to shed light on what [PMDD] can do to your self-image and your sense of the world.”

The various manifestations of PMDD can be as varied as they are intense: many people, in the lead-up to their period, may experience fatigue, physical pain, and brain fog. They are often unable to think clearly and find themselves prone to intense periods of self-doubt and hatred. “I don’t think PMS causes you to feel 10 times heavier than your own body weight, or makes you to feel so out of control and enraged that you would not want to believe that it’s you,” M explained. This is further complicated by the fact that these premenstrual symptoms also tend to disappear with the onset of the period itself. “You feel like an alter ego or another version of yourself,” M added, highlighting the constant flux that is characteristic of this disorder.

The stress and anxiety brought about by the ongoing pandemic has been significantly detrimental to menstruators. Dr Kiran Coelho, Head of Gynaecology at Lilavati Hospital, Mumbai, highlighted the extent of the problem: “Almost 10 percent of my patients now have PMDD. Those who had PMS symptoms before [the pandemic] have now developed PMDD as a result of the various external stressors they are facing,” she said. Dr Coelho also shared that PMDD has been common among those recovering from COVID and that, despite ongoing research, the complete effects of the coronavirus

on menstrual health are still being unpacked.

That there is a disproportionately gendered impact of these stressors is unsurprising, given that they are currently facing the burden of unpaid care work in their homes. The onset of the pandemic also witnessed an uptick in cases of domestic violence and abuse being reported on the National Commission for Women’s helpline. These stressors — combined with the uncertainty and hopelessness that the pandemic has given rise to — are likely to have compounded the occurrence of PMDD across the country.

While the nation continues to grapple with a mental health crisis alongside the pandemic, identifying and diagnosing disorders such as PMDD is critical, given how disabling its symptoms can often be. Anuhya Korrapati, founder of BeyondBlood, a not-for-profit that provides evidence-based health information to support menstruators, highlighted the lack of awareness around PMDD in the medical community. “I was actually diagnosed in the UK,” she said. “I wasn’t able to get a diagnosis here, because my doctors in India would just dismiss it as PMS, or gave me birth control instead.”

The lockdown has also made managing PMDD more challenging, given that it relies heavily on lifestyle changes along with medical and psychotherapeutic interventions. Physical activity and social interaction, which have been known to help with the management of the disorder, have been heavily disrupted since the imposition of India’s first lockdown in March 2020. The limitations on movement and the uncertainty of the future have significantly amplified symptoms for some. “Managing this has been so hard during the lockdown. Fresh air and walking are usually helpful, but when you can’t leave the house, a lot of coping tools are taken away from you,” said M.

However, the lockdown has also encouraged people living with PMDD to take charge of their own mental and emotional well-being. For Anuhya, lockdown allowed her to focus on exercising and eating healthier. “I think my PMDD did fluctuate over the course of quarantine, but I was able to build the resources I need to manage it.” Similarly, M was able to start going to therapy again, working on rebuilding the tools necessary to cope with the disorder. “The lockdown has been an opportunity to really be present with myself,” she said. “One of the hardest things to do with PMDD is to just show up. It made showing up [for meetings and university] easier than before.”

Despite the myriad challenges that have been faced by those living with PMDD over the past year, there is cause to be hopeful. There is a growing PMDD community, both in India and abroad. Saniya Sidhu, a Kolkata-based therapist, explains the importance of this solidarity: “the most important supportive factor is to acknowledge and validate the distress associated with PMDD. Accessing support from informed professionals and finding a community to share lived experiences are also essential to deal with the isolation.” Doing so has been essential to helping people like Namrata and M feel supported and seen. “Having a strong support system is so important to help manage [the disorder],” said Anuhya, who, along with Namrata, is an IAPMD-trained peer support provider. Pages such as @pmdd.india have formed a refuge for those who are trying to make sense of their experiences and navigate their own health journeys.

Similarly, there is increasing attention being paid to sexual and reproductive health, as well as mental health. Proactive for Her, a digital health platform, took to organising Care Circles during the pandemic. These circles were aimed at building a support system for those with premenstrual disorders and helping those living with them better understand their own bodies. Particularly during the isolation of lockdown, these groups can be catalytic, providing those with PMDD with a safe space to share their experiences.

However, accessibility — both to information and support — continues to remain limited. Saniya highlights this critical challenge: “I do notice more conversations happening about PMDD. However, all of them are happening on social media, which means that this information is reaching only a particular section of the population that has access to the internet.” Building this access, then, is critical to ensuring access to resources to make it through these turbulent times. The BeyondBlood platform, for example, hosts a vetted list of medical and mental healthcare professionals who are well-versed in PMDD treatment and management. Similarly, Anuhya’s goal is to ensure that resources on the disorder are translated into regional languages, thereby increasing accessibility and minimising scientific jargon.

There has been an increase in conversation around the disorder by younger doctors. According to Dr Coelho, building awareness is a cornerstone to more compassionate medical treatment moving forward. “We have to understand how these stressors impact people with PMDD, and therefore, how to be more empathetic,” she said. She sees a key role for men, especially in ensuring that the menstruators around them are able manage their PMDD and receive the care that they need. This can vary from sharing the load of care domestic labour, to conducting research to better understand the disorder, and, most importantly, remaining empathetic and compassionate.

The journey forward remains complicated. Namrata has acknowledged that, even now, having access to a psychiatrist who is informed about PMDD remains a rarity. While the pandemic has pushed the conversation further, it is still far from receiving the kind of attention it requires to adequately address it. PMDD concerns emerge sparingly from those living with it, because they, too, may not be aware of what it is. There is still little information to estimate how many people live with PMDD in India — or how drastically this number has changed since the onset of the pandemic.

Addressing a disorder that does not have a cure requires the sustained advocacy and support of not only those that live with it, but also the people and systems around them. PMDD can only be addressed through a collaborative reproductive and mental healthcare system and well-researched public policy that seeks to fight social stigma, rather than further reinforce it. Finally, there remains an urgent unmet need to give patients a voice and to validate their experiences. Having this safe space can make all the difference in the future, Namrata observed, “I have to be vocal about my experiences, to get people to believe me and what I’m going through. If I can get them to do that, maybe they will be kinder to me, or to someone else in the future.”

Sucharita Iyer is a Mumbai-based researcher and anthropologist. She currently works at Dasra, where she studies under-explored issues faced by young people in India, and is the co-founder of Thrifty Ideas India, a digital community focused on promoting sustainable and mindful living.