Halep had sailed through the first two rounds on the Spanish clay without dropping a set but she ended up second best in a match which yielded 15 breaks of serve. 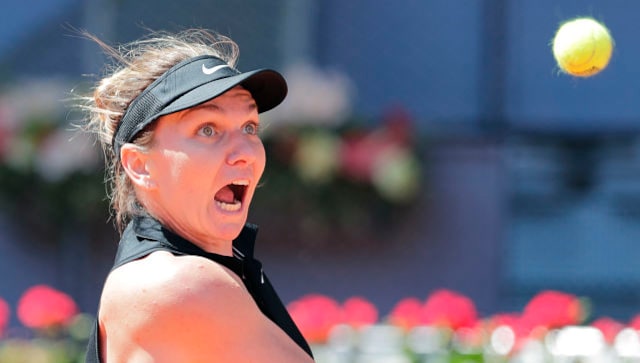 Simona Halep of Romania eyes the ball during her match against Elise Mertens of Belgium at the Madrid Open. AP

Madrid: World No 3 Simona Halep was dumped out of the Madrid Open on Tuesday, losing 4-6, 7-5, 7-5 in the last 16 to Belgian Elise Mertens, while Jannik Sinner and Andrey Rublev won their opening men’s matches.

Romania’s Halep, who won the Madrid title in 2016 and 2017, is still yet to reach a WTA Tour final this season and this was her earliest exit in the Spanish capital since a 2015 first-round loss.

Halep had sailed through the first two rounds on the Madrid clay without dropping a set but she ended up second best in a match which yielded 15 breaks of serve.

Halep, a two-time Grand Slam champion and former world number one, was twice a break up in the final set at 3-1 and 4-3 but finally succumbed after just over two and a half hours of play.

Two other quarter-final line-ups are also settled, with world number one Ashleigh Barty set to meet ninth seed Petra Kvitova while eighth seed Belinda Bencic is up against Spaniard Paula Badosa, ranked 62 in the world.

Sinner through as Pella retires

In the men’s draw, Italian teenager Sinner booked his place in the second round when his opponent Guido Pella withdrew with a leg injury in the second set while trailing 6-2 4-4.

World number 18 Sinner barely gave Pella time to breathe in the first set, with an early break of service taking him to 3-0.

Another break saw the 19-year-old take the set.

Pella responded in fiery fashion, opening up a 4-1 lead in the second before feeling discomfort in his right leg which, after receiving medical attention on court, ultimately led to his retirement.

“I never played against him before, so you never know what to expect,” said Sinner.

“I was trying to keep focused on what I had to do. I think it has been a good first match obviously.”

Sinner, the Miami Masters runner-up, will face Alexei Popyrin in the second round after the Australian beat German Jan-Lennard Struff 6-3 7-6 (7/4).

Sixth seed Rublev, meanwhile, had to work hard before becoming the first man through to the third round, battling for two hours and 20 minutes with American Tommy Paul before coming through 6-7 (5/7), 6-3, 6-4.

“It’s important to win when you’re not (playing) your (best) game and things are not going well,” the Russian said.

“So it’s really important to win this match to have more confidence. I’m happy that I turned it around.”

The in-form Rublev has reached at least the quarter-finals in all of his previous eight tournaments this season.