Everything you need to know

Resident Evil Village is a rollercoaster ride of emotions and scares that concludes on a sad note.Ethan Winters bids goodbye after sacrificing himself to save his family while Chris, Mia, and baby Rosemary escape in a helicopter headed to the BSAA HQ in England.

While not much is known about the events following the cut scene, after the credits, Rose can be seen as perhaps a young teenager visiting her father’s grave. Here’s where fans get their first clues on a sequel.

While this is all speculation and should be taken with a pinch of salt, there is a very real possibility of Rosemary picking up the torch from where her father left off and perhaps becoming the protagonist for Resident Evil 9.

Is there a Secret ending in Resident Evil Village?

As mentioned before, there is no secret ending in Resident Evil Village. However, the post-credit cut scene sheds a lot of light on the possibility of a sequel.

Following their escape on the Helicopter, an older Rose reappears post-credit, sitting on a bus. On the bus she overhears a conversation between a mother and daughter, discussing a storybook.

After a while, she gets off when the bus stops with flowers in hand, and walks into the cemetery, towards a headstone that has the name “Ethan Winters” etched into it. “Hey Dad, Happy Birthday,” he says, as she lays down the flowers on the tombstone.

As soon as she’s done, an agent in a black SUV arrives at her location. “Duty calls. I love you,” she says before walking towards the vehicle to meet the agent; following which he mocking calls her “Eveline” to which Rose confronts him and says,

“Don’t you ever call me that again. I can show you things even Chris Doesn’t know I can do”

Following the argument, she gets into the SUV, and the radio crackles, a voice asks the agent if they should take the shot, to which replies, “Stand down. I can handle it. She’s just a kid.”

Following the conversation, the agent gets into the SUV and they drive off. The cut-scene fades and the words, “The Father’s Story is Done.” appear on the screen.

Also Read: How to pick locks in Resident Evil Village

By the looks of it, it seems as if Rose escaped a facility and the agent was sent to retrieve her, hinting that she’s working with the BSAA as well. 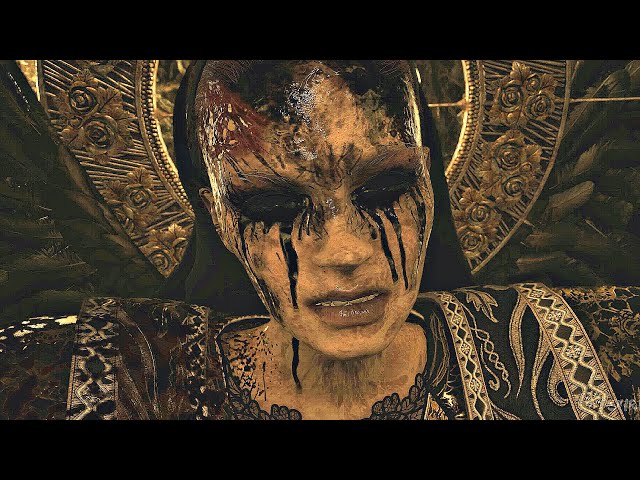