The Austrians will open play at Euro 2020 in Group C against North Macedonia on Sunday in Bucharest. The two teams met twice in qualifying for the tournament, with Austria winning 4-1 and 2-1. 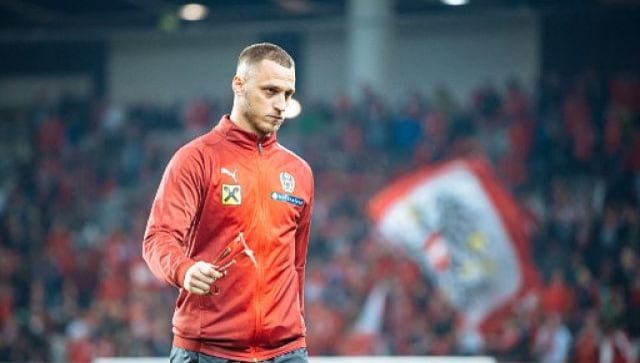 Austria’s Marko Arnautovic has scored 26 goals in 87 appearances for the national team. AFP

Bucharest: Although scoring goals have been a major issue for Austria at previous European Championships, scoring goals against North Macedonia has been a non-issue in recent years.

The Austrians will open play at Euro 2020 in Group C against North Macedonia on Sunday in Bucharest. The two teams met twice in qualifying for the tournament, with Austria winning 4-1 and 2-1.

But goals haven’t come easy on the big stage. In six games played in the 2008 and 2016 editions of the continental tournament, the Austrian team managed only a single goal in open play — in a 2-1 loss to Iceland five years ago.

Heading into Euro 2020, Austria lost to England 1-0 on 2 June and were held to a scoreless draw by Slovakia last Sunday.

Austria defender David Alaba, perhaps the team’s best known player, tried to take something positive from the last warm-up game, but the lack of goals was on his mind.

“All in all, it was OK,” Alaba, who has moved to Real Madrid after 13 successful seasons with Bayern Munich, told Austrian broadcaster ORF. “We created a lot of chances, but unfortunately we didn’t convert them.”

Besides Alaba, Marko Arnautović will be expected to provide leadership and goals over the next few weeks.

The 32-year-old striker, who is reportedly on the way back to West Ham after a lucrative stint in China, has scored 26 goals in 87 appearances for the national team.

Arnautović scored two of those four goals against North Macedonia in June 2019 in the qualifying match. Alaba, a defender at club level who usually plays as a midfielder for Austria, scored in the 2-1 victory a few months later.

North Macedonia, meanwhile, will be making its debut at a major tournament after qualifying through the Nations League playoffs. But they have had success scoring some goals and pulling off some upsets.

The biggest upset came in March when the team beat Germany 2-1 in a World Cup qualifier.

North Macedonia’s biggest scoring threat will be Goran Pandev, who made his debut for the national team 20 years ago. The 37-year-old Pandev has scored a national team record 37 goals, including the one that secured a place at Euro 2020.

The Netherlands and Ukraine are also in Group C, giving both teams chances to score more goals as the tournament progresses.

“We may be (considered) outsiders at this championship, but we are not bothered by that role,” North Macedonia coach Igor Angelovski said Saturday. “On the contrary, it brings additional motivation to all of us.”