How did NASA’s Ingenuity helicopter make it first flight on another planet?- Technology News, Technomiz

Imagine that you are flying a model helicopter or a drone. You are there with the auto controls. You switch them on. The rotors start to turn, gradually increasing their spin. You watch, then push the control for lift. Your helicopter rises, hovers, then at the next command moves forward. Oops, it didn’t go high enough. You quickly move the joystick and the drone rises to fly above the obstruction. Finally, it’s in the air, moving at speed above sand dunes, hills and valleys – sending back pictures as the landscape unfolds.

Ingenuity helicopter’s camera captured a picture of its own shadow as it hovered above the surface. Image credit: Twitter @NASA

Now imagine that you are flying your drone on a planet 180 million kilometres away. It takes 20 minutes for your command to reach the planet – and the pictures you see of what is happening are 20 minutes old. You cannot take evasive or corrective action if anything goes wrong. If it went wrong, it would be too late. This is the type of situation that Nasa’s engineers did not wish to experience on the maiden flight of the Ingenuity helicopter on Mars on 19 April.

And luckily they didn’t. The flight had already been postponed because of software problems. Given the issue with the time delay between Mars and Earth, all the commands to operate Ingenuity had to be sent in advance – and so the engineers had to be certain that their command sequences were error-free.

All the planning and calculations paid off. Just after 12:00 BST, a Nasa engineer announced to mission control that “all data sets are nominal”. This, of course, is space-talk for: “We are incredibly happy, everything has gone well.” A few minutes later, we saw the data – a rather unprepossessing graph. But it was sufficient for the engineers in mission control to clap and cheer.

Then came the images – the first from Ingenuity’s camera, a picture of its own shadow as it hovered above the surface. Pretty amazing – but we have seen spacecraft shadows before. Then the video – which was, for me, utterly mind-blowing. Taken by the Perseverance rover, it showed its travelling companion’s complete flight, from take-off to landing. It’s a film of the first powered flight on another planet, taken by one robot of another. It was almost too clever – it looked like some of the animations that Nasa is so good at producing. But it was real. And it was awesome.

The first flight on Mars was not quite as adventurous as could be imagined – no soaring across the desolate landscape taking images of craters and sand dunes. Ingenuity rose about three metres above the ground before landing again. It was in the air for about 40 seconds in total. But those 40 seconds have a similar level of significance as the first successful powered flight on Earth – which lasted only about 12 seconds. Admittedly, this flight by the Wright brothers moved forwards about 40 metres – but was at a similar height off the ground as was Ingenuity.

What is the importance of Ingenuity’s maiden flight? Above anything, it is a technology and engineering achievement. Flight requires lift – there is a well known relationship between the weight of an aircraft and the difference in atmospheric pressure between its upper and lower surfaces which provides this lift. The rotating blades of a helicopter provide the lift required – the faster the blades spin, the more lift is generated. On Earth, with an average air pressure of 1000 millibar, a helicopter blade spins at a rate of between 400 and 500 rotations per minute. 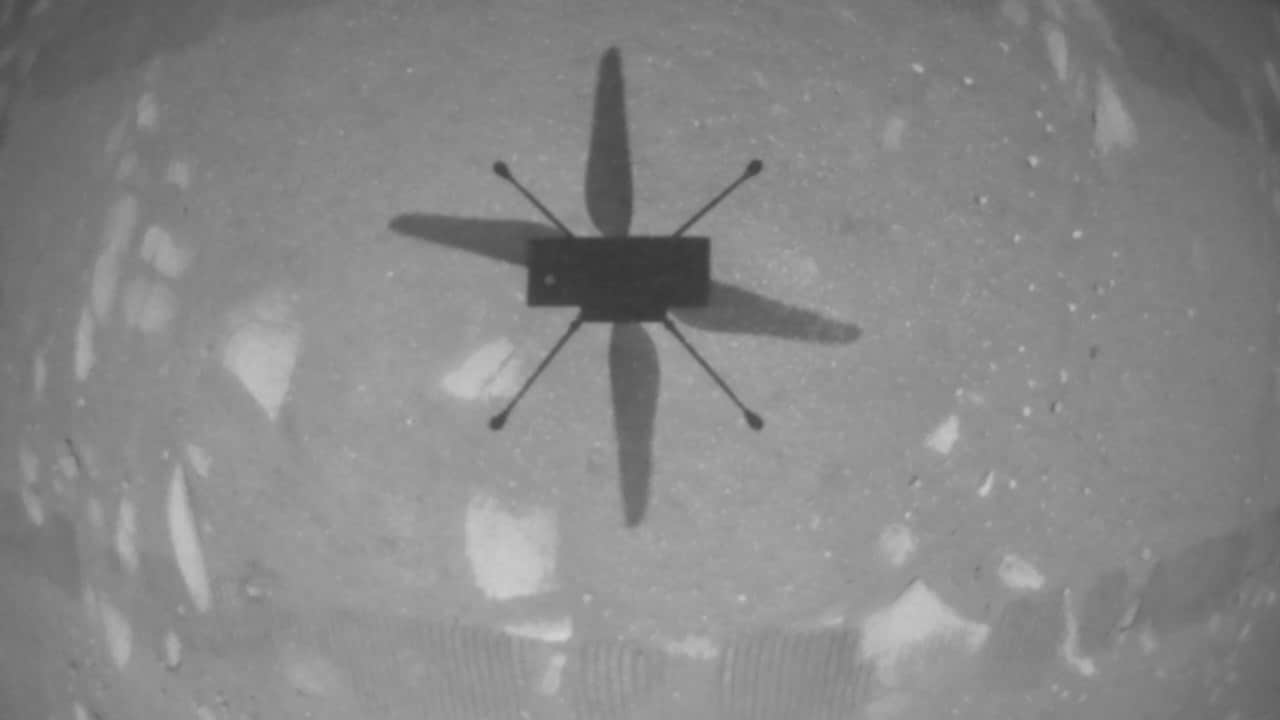 NASA’s Ingenuity Mars Helicopter took this shot while hovering over the Martian surface on April 19, 2021, during the first instance of powered, controlled flight on another planet. Image credit: NASA

The reduced gravity of Mars (about one-third that of Earth) helped to offset the effect of the much lower atmospheric pressure (about six millibar). But even so, Ingenuity’s blades had to rotate about 2400 times per minute to provide the required lift for the two-kilo craft. Just achieving such a rapid spin rate for the two one-metre long blades was a significant advance in propulsion technology.

The flight is also the harbinger of things to come: Nasa has planned several more flights of increasing complexity to take place over the next two weeks. Progress has to be cautious – new hazards will become apparent as the helicopter moves – when wind speed and direction join atmospheric pressure as issues to be addressed.

Ingenuity doesn’t have the rear rotor blades of a conventional helicopter for “steering” – and, as mentioned, commands cannot be given in real time. Each flight will be as nail-biting as the first – and each will provide new views of the local environment of Jezero crater, where it is located. Although these images will be limited, they will still help Perseverance to build up a better picture of its surrounds.

Neither of two coming missions to Mars, ExoMars 2022 and a sample return mission, planned by Nasa and Esa, currently have on-board helicopters.

The sample return mission, set for launch in 2026, has a rover which is designed to pick up the tubes of samples that Perseverance will collect. Imagine if the fetch rover were to be accompanied by a helicopter to ensure that it took the safest and most efficient route from its landing site to the cache of tubes and then on to the vehicle that will carry the samples from Mars’ surface into orbit. This may sound like science fiction – but it’s becoming more achievable by the day.

Ingenuity apparently carried on board a small piece of canvas from the Wright brothers’ airplane, the Wright Flyer. It was, clearly, an excellent token for success for the little spacecraft. Flights across the surface of Mars will probably never be as commonplace as flights across Earth – but they will happen. Maybe this first flight was not one small step or a giant leap – but it was certainly a rotor blade rise into history.