How to catch a Scorpion in Animal Crossing: New Horizons

Animal Crossing players are always in need of more bells. Buying furniture and clothing, redesigning the town, investing in turnips, tossing money at friends; there’s always another expense that needs to be covered. Luckily, there just so happens to be a good source of income right under the player’s feet.

Scorpions (and Tarantulas, but they aren’t out and about right now in Animal Crossing: New Horizon) are worth 8,000 bells a pop. And with the existence of mythical mystery islands where scorpions will spawn like rabbits, these reckless critters are an easy source of extra cash. As long as the player can manage to catch them, that is.

How to catch a Scorpion in Animal Crossing: New Horizons

Scorpions have been scittering around Animal Crossing islands since May began and will continue to do so until the end of October. But they only come out to play at night time, between 7 PM and 4 AM. So if players haven’t been seeing any of the armored arachnids around anywhere, they may need to play later on in the day.

Also, Scorpions will not be out and about at all for anyone who has their Switch’s location set to be in the southern hemisphere. Those Animal Crossing players will need to wait for November until scorpions begin crawling around once more.

The biggest thing to note about hunting scorpions is that, like with many bugs in Animal Crossing, the player will only get one shot. Scorpions get spooked by a few actions that the player can take and will aggressively sting the player, sending them off to sleep while the scorpion flees. These actions include moving too fast towards the scorpion, missing with the net, and getting too close with the net.

Catching a scorpion without any preparation takes patience and precision. Players need to creep close with their net drawn. The scorpion will freeze, posturing defensively, while the net is drawn but has not been swung. This gives players just one shot. They need to get within swinging range while still staying far enough away to not aggravate the irate scorpion. It’s a narrow threshold that is hard to precisely nail without practice. But veteran Animal Crossing players should be able to figure out this range quite quickly.

Alternatively, players can set up a trap of sorts for an easy catch. This trap is exceedingly simple to make; the player just needs a shovel and a bit of space to dig holes. The player will need to dig holes in such a way that they will contain the scorpion. Here’s a quick tutorial on how this should be done in Animal Crossing: New Horizon: 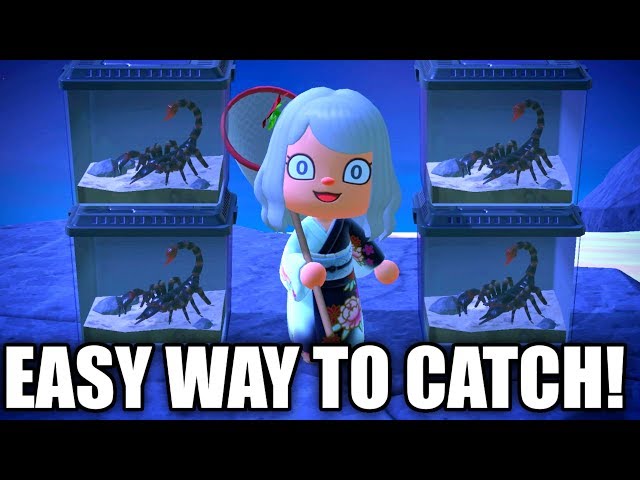 Terrain will make each design vary, but the function is always the same. The basic concept is that the player will anger the scorpion and initiate the chase. The player will then skirt around the whole hole trap, getting the scorpion stuck on the other side. Then it’s just a matter of putting the creepy crawlie on house arrest.