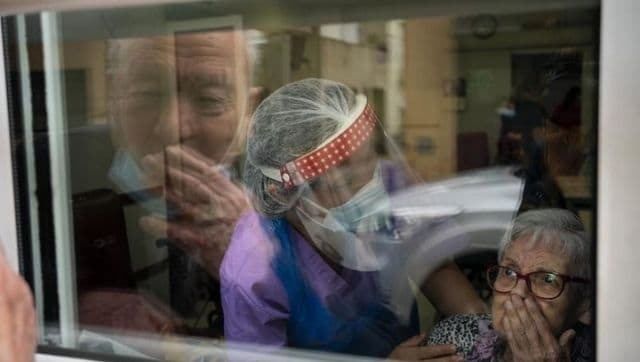 In Spain, an elderly couple separated after the pandemic overcome grief through a glass pane-World News , Technomiz”

The couple met in 1953 and got married in 1955. Except for a spell early in their marriage when he worked away from home, they always were together. Javier Anto, 90, and his wife Carmen Panzano, 92, blow one another kisses through the window separating them. Photo via The Associated Press

pandemic struck Spain, a glass pane has separated Xavier Antó and Carmen Panzano for the first prolonged period of the couple’s 65-year marriage.

Antó, age 90, appears three or four times a week at the street-level window that looks into the Barcelona nursing home where his 92-year-old wife lives, which closed to visitors more than a year ago to protect residents from COVID-19

Employees from the home provide him with a chair and bring Panzano to the other side of the window. Antó shows her photos of their grandchildren on his phone to try to counteract the effects of her Alzheimer’s disease.

Both have vaccines against the coronavirus

, but Spain’s nursing homes still are under tight controls after tens of thousands of the country’s oldest adults died in senior care facilities during the early months of the pandemic. The couple met in 1953 and got married in 1955. Except for a spell early in their marriage when he worked away from home, they always were together.

“We had never been apart,” Antó told The Associated Press. “Last March, the home’s director told me that when I left I wouldn’t be able to come back because the local authorities had established some very strict protocols,”

At first, workers at the homemade video calls on a tablet two or three times a week so he and Panzano could see each other, he said. “Then they set up a booth with a transparent divider, but I prefer this window because with the booth you were limited to a certain day, and then only had half an hour,” Antó recalled. “I come to the window since in the booth there is also a screen between you, and I can’t touch her or give her a kiss anyway.”

When he comes to visit, the wife and husband put their hands on the glass and blow each other kisses. Although they cannot hear each other speak, at least they don’t worry about how much time they have to share.

When he cannot come, a home assistant who worked for the couple for over 20 years comes in his place.

“She is like a daughter to us,” Antó said. “I come as often as I can and will keep doing so as long as my body allows me,” he said. “If I were the sick one, she would do the same thing for me, and then some.”

The Associated Press writer Joseph Wilson contributed to this report.