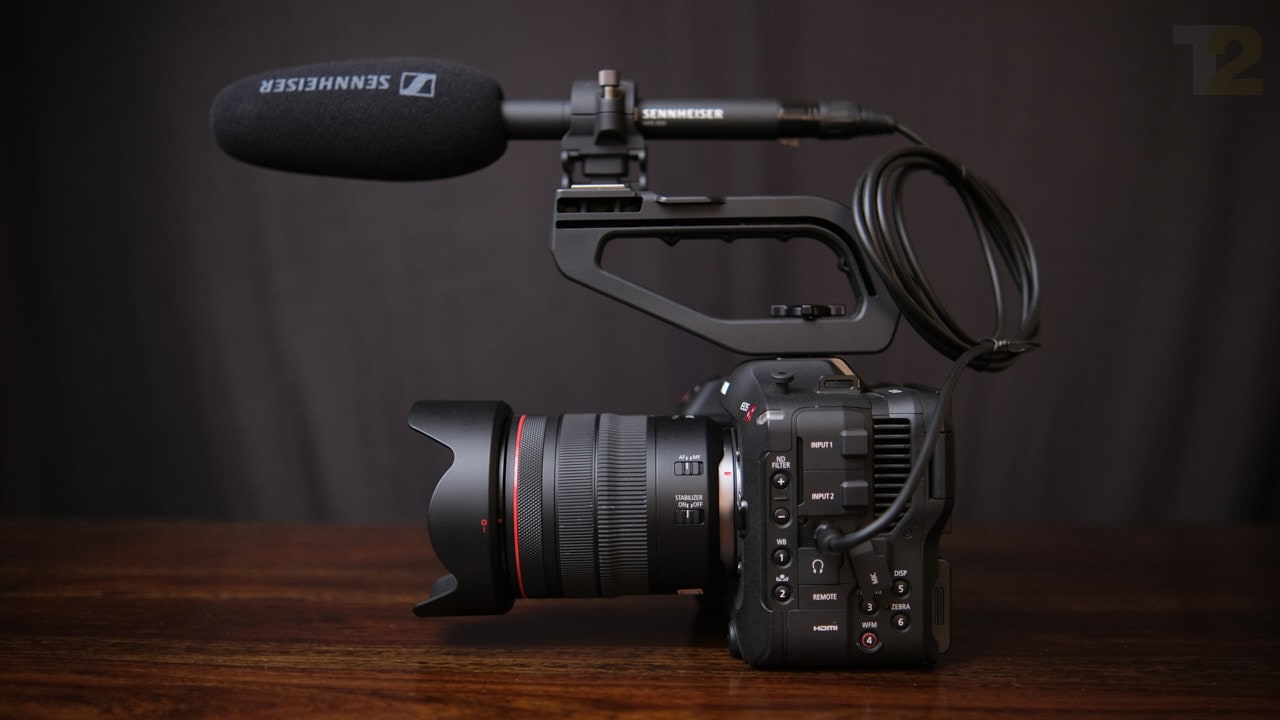 In the right hands, it’s more than worth its Rs 5.5 lakh price- Technology News, Technomiz

The term ‘pro’ has been bandied about so freely that the word has lost all import; it’s now more noun than adjective. Unlike what Apple, Xiaomi and the rest of the consumer-tech world will have you believe, a ‘Pro’ model isn’t a top-tier consumer device.

The Oxford English dictionary defines a profession as: ‘a paid occupation, especially one that involves prolonged training and a formal qualification.’ A professional is someone engaged in a particular occupation, and usually, has been trained to be so engaged. A professional tool is enables them to perform said job.

The Canon C70 is one such tool. It’s a camera designed from the ground up to be one thing and one thing only: a pro tool for filmmakers. This is not a hybrid mirrorless system that shoots photos and videos. This is not a camera you sling around your neck and take with you on camping trips.

This is a camera with dual mini XLR inputs with 48 V phantom power. A camera with support for external power and hot-swappable batteries. A camera with dedicated buttons for zebras, focus-peaking and histograms. A camera that shoots 4K video at up to 120 fps at 10-bit colour depth and 4:2:2 chroma subsampling for as long as your memory card has free space.

By default, you select a shutter angle and not shutter speed. Integrated ND filters are a button-press away. There’s a dedicated top handle with a shock-proof mic mount and cold shoe. Also included are a full-size HDMI port with a clean 10-bit output, mounting points for professional tripods and more. The built-in ND filters are a life-saver in certain situations and I wish more cameras had them. That said, pros might already be using variable ND filters or matte boxes on their camera rigs. Image: Anirudh Regidi

If this flood of jargon sounds intimidating, it should, because it is. And the intimidation doesn’t end there.

While I’m an amateur when it comes to filmmaking and won’t even rank at the bottom of a list of bottom-tier YouTubers, I have, in the course of my job, worked on dozens of videos over the years and I have enough equipment to start an amateur-grade filmmaking studio of my own. This includes tripods, motorised sliders, lights, mics, gimbals and more.

When the C70 arrived, I couldn’t figure out what to do with it. What I thought was a good quality fluid head (for what I thought was an expensive tripod) could barely handle the load of the C70. Of all my ‘fast’ SD cards, many costing upwards of Rs 3,000, the only one fast enough to handle the C70’s footage at max quality was a UHS-II V90 class Angelbird AV PRO SD card rated at 300 MB/s.

My frail musculature, and DJI Ronin SC gimbal that I thought was hot stuff when I bought it, couldn’t take the strain of the C70. The footage that I shot is barely viewable, let alone editable, on my Rs 2.5 lakh 16-inch MacBook Pro with 5500M graphics. My 64 GB card filled up in 20 minutes and my 1 TB SSD in mere hours. My lights ran out of charge and overheated before the camera did.

The list is endless, and once again a stark reminder that the C70 is not for amateurs. You don’t just spend Rs 5.5 lakh on this camera on a whim; you do so when you have the skill and equipment to handle it.

Once I got past the intimidation, and past the crippling terror that gripped me every time I picked up this (frighteningly expensive) beast of a camera and started shooting, that’s when I truly started to appreciate and respect it.

I used to shoot on an iPhone before upgrading to the Fuji X-T30, and now, the X-T4. The latter isn’t an amateur’s camera, and without question, one of the most capable consumer-grade mirrorless cameras out there. Compared to the C70, however, it feels like a toy.

Every time I have to shoot a video on my X-T4, I have to calculate the shutter speed based on the shutter angle I want and spin a couple of dials, then I lock in the exposure and white balance, dig out my variable ND and spin that as needed. Then there are other limitations: a 30-minute video recording limit, an overheat warning at 45 minutes, a 75-minute battery life, etc. I need adapters for my mic as well as for monitoring audio and video. 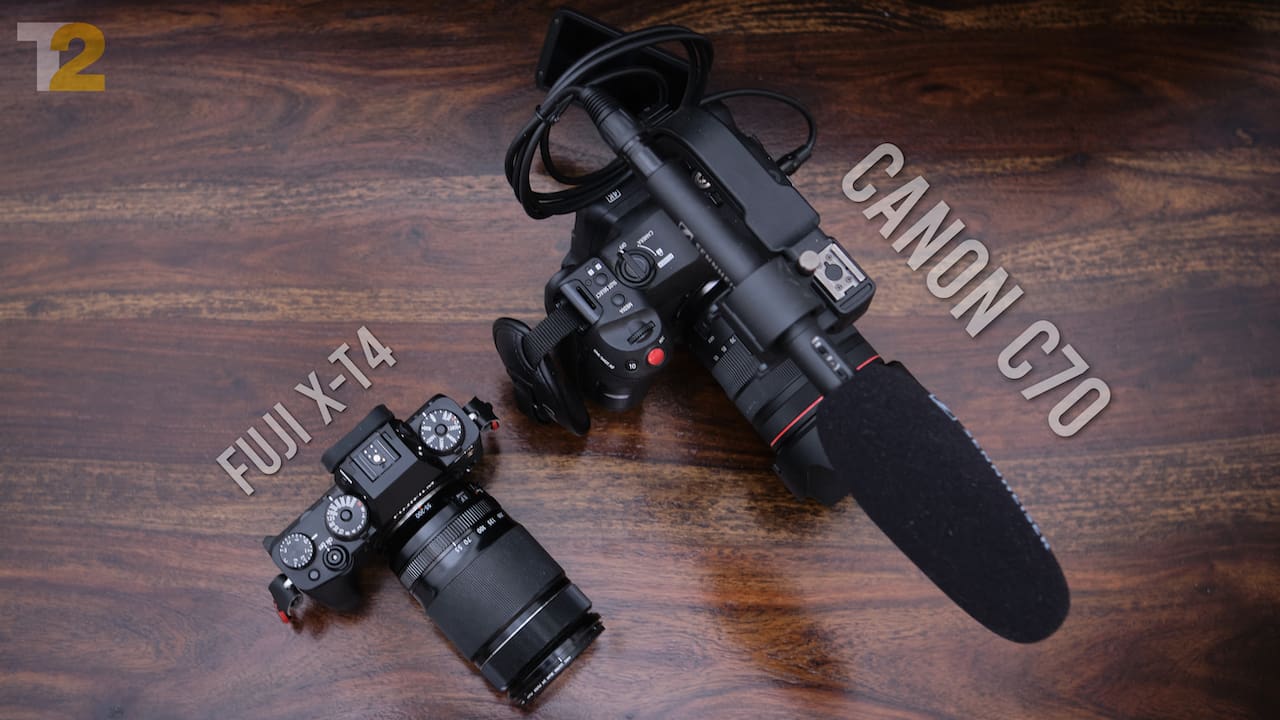 A relatively large, premium mirrorless camera like the Fuji X-T4 looks like a toy in front of the Canon EOS C70, as it should. Image: Anirudh Regidi

I can’t mount a handle without getting a cage, I can’t mount heavy mics for fear of damaging the hot-shoe, and I’m constantly twiddling with settings between each shot, checking on battery life and turning the camera off between shots to ensure it doesn’t overheat. And don’t even get me started on the multiple crop-factors I need to juggle when shooting at different frame rates. Every shot I take requires minutes to set up and re-calibrate.

With the C70, these concerns are immaterial. I plug my XLR mic directly into the camera without using an external recorder, glance at the screen, tap a few buttons to check colour balance and exposure, and I’m set. There’s a silent fan which ensures the camera never overheats, the battery lasts for several hours and there’s no record limit at any framerate or resolution.

When recording, shutter speed is calculated automatically based on framerate and angle, and there’s no crop at 60 or 120 fps. In other words, I don’t need to worry about framing or the quality of motion blur once I’ve set my shot. Hell, I don’t even need to worry about exposure. Once I shift from 120 fps to 30 fps, say, I just press a button and an ND filter pops up to compensate for the brighter scene. 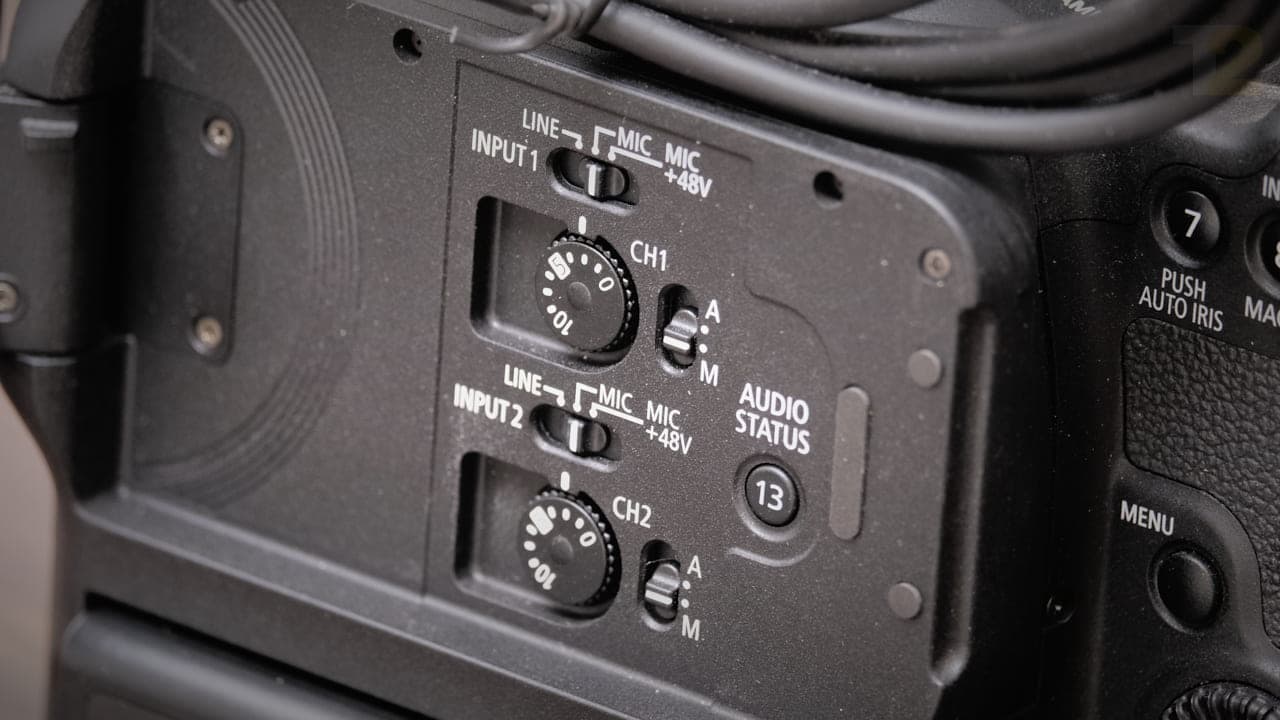 The audio control panel on the Canon EOS C70 is by far my favourite feature. The panel, coupled with mini XLR inputs with phantom power resolves one of my biggest frustrations when shooting video. Image: Anirudh Regidi

My favourite feature by far has to be the audio control panel. My earlier setup involved an XLR mic – a Sennheiser MKE 600 – on a boom arm placed directly over my subject and recording to a Zoom H5. My X-T4 would record the scene and I’d have to import all this data, and a nightmarish collection of folders, into my PC and sync. If I wanted to mount the mic on my camera, I’d have to dig out an AA cell for phantom power, an adapter, and then spend several minutes mucking about in the settings menus tuning audio levels. If I have to change any setting, I have to repeat most of the above.

With the C70, there’s a dedicated panel behind the monitor, and you just spin dials and press buttons to adjust gain and phantom power on the fly. Limiters and filters are built into the camera.

Better yet, the C70 also has the option to record audio to a separate SD card (it has two slots) while recording slow-motion video. This gives me a high-quality track to stretch over the normally silent slow-mo recording.

Factor in support for RF and EF lenses (via an adapter), Canon’s incredible Dual Pixel AF, touch-tracking, and a host of other features, and you’ll begin to understand why this camera is special.

The Canon EOS C70 is one of the most powerful cameras I’ve ever used, and while it costs as much as a small car, I’d say it’s worth every rupee. Image: Anirudh Regidi

I was only allowed a few days with this camera, and that’s barely enough time to probe the depths of its potential. Even in that limited time, however, I realised that I was spending less time worrying about the camera and more on framing and composition. Anything I needed was a mere tap away, and after the initial setup, I don’t recall ever diving into the menu system. Resetting a shot required seconds at most.

This camera is a beast, but also a forgiving one. Even a geeky amateur like myself could get to grips with it in a few hours’ time. I was intimidated by this camera at first, but I quickly grew to respect it, and eventually to love it.

There are equally capable (and more expensive) camera systems out there – the RED Komodo and Sony FX III immediately spring to mind – but I’m not qualified to talk about them. All I can say is that the C70 is a serious – and seriously impressive – camera that has made me rethink my expectations from cameras in general.

I’m certainly impressed, and judging by feedback from pros, they are, too. Someday, I hope I’m qualified and experienced enough to be worthy of gear like this.