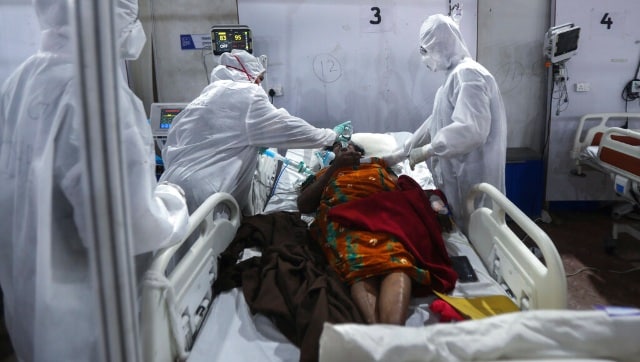 cases and deaths has been noted in India even as hospitals and crematoriums in several cities remained full.

The claim comes in the backdrop of an alarming news report from Bihar’s Buxar, where local authorities claim as many as 71 bodies of suspected COVID patients floated downstream from neighbouring Uttar Pradesh. Another bunch of over 40 bodies were found floating in the river in UP’s Ballia and Ghazipur districts.

While there was no clarity on the circumstances surrounding the deaths of these unidentified people, their sheer numbers in the midst of an unprecedented pandemic instilled fear that these were bodies of COVID patients either abandoned by resource-starved family members or dumped by callous officials at a time when crematorium and funeral homes are overburdened.

On the other hand, as per this Technomiz report, in the national capital, the administration has been forced to build makeshift crematoriums at public places, as Delhi is running out of space to cremate its dead. Public parks and other empty spaces are also being utilised for cremations.

In other development, Prime Minister Narendra Modi will not travel to the UK to attend a summit of the G7 grouping in person in view of the prevailing coronavirus

situation, the Ministry of External Affairs (MEA) said on Tuesday. The G7 summit is scheduled to take place in Cornwall in the UK next month.

India has been reeling under a calamitous second wave of coronavirus

infection. However, according to official data, the daily numbers of deaths and infections have started to go down. New cases of coronavirus

After registering a steady rise for two months, the active cases have reduced to 37,15,221, accounting for 16.16 percent of the total infections, while the national COVID-19

recovery rate was recorded at 82.75 percent.

Appreciating models of containment used in Mumbai and Pune, the Union health ministry called it a “fine example” that shows how containment measures can help restrict the spread of the disease. The Centre also said that these models should be replicated at the national level.

“Around 800 SUVs were refurbished to convert them into makeshift ambulances. A software platform was created to track and manage these ambulances. All these systems work together to ensure that patients do not face problems in finding a bed.” Joint Secretary Lav Agarwal said, appreciating the systematic efforts of the Brihanmumbai Municipal Corporation, in fighting COVID-19

“We have observed that strict measures like restrictions on mass gatherings and on the intermingling of people along with the closing of non-essential activities for a period of 15 days reduce the rate of growth of cases and cases start plateauing”, said the Joint Secretary.

jab centres due to a shortage of shots and urged the Centre to use its special power to allow more firms to manufacture vaccines. The Aam Aadmi Party government also announced that it will float a global tender to procure additional doses.

As many as 125 centres administering Covaxin to 18-44 age group are likely to be closed down Wednesday as the Delhi government did not receive new stock of the vaccine till Tuesday evening.

Chief Minister Arvind Kejriwal wrote to Prime Minister Narendra Modi, saying the Centre should share the vaccine formula of the two manufacturers with other capable pharmaceutical companies to scale up production in the country.

In his letter to Modi, Kejriwal said the entire country can be provided a safety cover by allowing more companies to manufacture the vaccines on a war footing in preparation for an anticipated third wave of the pandemic.

He said the Centre can also terminate the monopoly on vaccine production through the patent law.

Similarly, citing a shortage of COVID-19

vaccine does, the Maharashtra government on Tuesday decided to divert three lakh vials of Covaxin meant for the 18-44 age group for the use of the people aged 45 years and above.

Speaking to reporters, state Health Minister Rajesh Tope also said more than five lakh people above 45 years are awaiting the second dose for the want of the vaccine.

“Efficacy of the vaccine is largely affected if the second dose is not administered in a stipulated time. To avoid such health crisis, the state government has decided to divert three lakh vials (of Covaxin) purchased for the 18-44 age category for the people above 45 years,” Tope said.

In south India,  Andhra Pradesh Chief Minister YS Jagan Mohan Reddy asked the Centre to direct Bharat Biotech and ICMR-NIV to transfer the Covaxin manufacturing technology and provide the viral strain to “whoever is interested and capable of manufacturing the vaccine” so that the production could be ramped up.

In a letter to Prime Minister Narendra Modi, Jagan claimed that the present total manufacturing capacity of Covaxin did not cater to the country’s requirement.

“It may take several months to get all vaccinated at this pace. Please explore the possibility of involving all such production firms and enable them with the technology, intellectual property rights to deliver the vaccine as quickly and as affordable as possible,” the Chief Minister said.

“Anyone who can manufacture or is interested in manufacturing the vaccine should be encouraged to do so in the larger public interest. Entire manufacturing capacity should be mobilised and put to use in this testing times,” Jagan added.

Taking note of these vaccine shortages, many states took other measures to keep up with rising measures.

The governments of Delhi, Karnataka, Andhra Pradesh and Telangana on Tuesday joined several other states which have decided to issue global tenders for procurement of COVID vaccines as the domestic supply fails to keep up with the rising demand amid the fierce second wave of the pandemic.

The Centre said it has so far provided more than 18 crore vaccine doses to states and UTs free of cost, but many of them have complained of an acute shortage of the jabs and are now prioritising people who need to be given their second dose within a prescribed period.

“Till now, we had depended only on vaccines supplied by the central government and it was not procured from the open market by floating tender. Now, it has been instructed to float the tender and to complete the process within seven days,” Narayan said.

vaccines from foreign manufacturers to complete the vaccination process as quickly as possible.

WHO warns against use of Ivermectin

World Health Organisation has warned against the use of Ivermectin, an orally administered drug in treating COVID-19

patients. The move comes one day after Goa government decided to administer the drug to its entire adult population, notwithstanding the fact whether they are COVID positive or not.

, with the only exception for its use being during clinical trials.

“Safety and efficacy are important when using any drug for a new indication,” chief scientist Soumya Swaminathan said.

Safety and efficacy are important when using any drug for a new indication. @WHO recommends against the use of ivermectin for #COVID19 except within clinical trials https://t.co/dSbDiW5tCW

task force held a meeting to deliberate upon the issue and decided not to include Ivermectin in the clinical management protocol “because of lack of sufficient evidence on its efficacy based on randomised trials held in India and abroad,” news agency PTI had reported, citing ministry sources.

71 bodies fished out from the Ganges in Bihar so far

The Bihar government on Tuesday said altogether 71 bodies have been fished out from the Ganges in Buxar district, where these were found floating in the river, triggering suspicion that the abandoned corpses could be those of COVID-19

State Water Resources Minister Sanjay Kumar, a key aide of Chief Minister Nitish Kumar, came out with a series of tweets, asserting that the bodies had flown downstream from neighbouring Uttar Pradesh.

“The Bihar government is seized of the matter of unfortunate case of floating mortal remains in river Ganga… The bodies have floated into Bihar from UP,” said Jha, adding, doctors have confirmed upon post-mortem that the deaths had taken place “four-five days” ago

Bodies were also seen floating in the Ganga in Uttar Pradesh’s Ballia and Ghazipur districts, according to local residents and the authorities on Tuesday. Ironically, the authorities here blamed the state of Bihar.

Superintendent of Police Vipin Tada said he did not know how many bodies were found. “The bodies were old. In Bihar, there is a tradition of disposing of dead bodies in the river,” he said, adding that seeing the wind direction, it seems the bodies came from Bihar.

24 COVID patients in Goa, 11 in Andhra die in govt hospitals

patients died at the state-run Goa Medical College and Hospital (GMCH) in the early hours and sought an investigation by the High Court to find out the exact cause.

He said these fatalities occurred between 2 am and 6 am “which is a fact”, but remained evasive about the cause.

Goa Chief Minister Pramod Sawant, who visited GMCH, said the gap between the “availability of medical oxygen and its supply to COVID-19

wards in the GMCH might have caused some issues for the patients” even as he stressed that there is no scarcity of oxygen supply in the state.

patients have died due to a problem with oxygen supply inside the ICU in Ruia hospital late on Monday night. The state government has announced a compensation of Rs 10 lakh each to the kin of these COVID-19

patients, who died at the government-run Ruia Hospital in Tirupati.

Chief Minister YS Jagan Mohan Reddy announced this during a videoconference with district Collectors. There was a five-minute lag in reloading liquid medical oxygen, which caused the pressure to drop, resulting in the deaths, Chittoor district Collector M Hari Narayanan had said.

, with four hours of relaxation in the morning.

From Wednesday onwards, all southern states – except Andhra Pradesh, where there is a partial curfew – will be under lockdown. Tamil Nadu and Karnataka are under lockdown till 24 May. In Kerala, the curbs are in force till 16 May.

The Chief Minister K Chandrashekhar Rao-led cabinet meeting, which was held at Pragathi Bhavan has decided to give a relaxation period from 6 AM to 10 AM for the people for their general activities and needs, an official release said.

vaccines on a war footing, it said.

Works related to agriculture produce, allied sectors, work undertaken with the agriculture machines, running of rice mills, transport of the paddy and rice, supplying paddy to FCI, fertiliser and seeds shops and manufacturing companies and other agri-based sectors are exempted from the lockdown, it said.

“The State Cabinet will meet again on 20 May, would review the situation on the continuing of the lockdown and take a decision accordingly,” the release said.