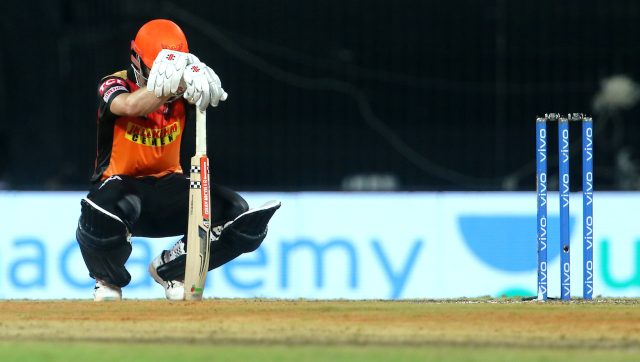 Chennai: Be it in the World Cup or IPL, Kane Williamson is “getting tired” of finishing second in Super Overs.

The New Zealander’s latest tryst with the Super Over came on Sunday night when his team Sunrisers Hyderabad failed to achieve the desired result in its IPL match against Delhi Capitals.

“I am getting tired of coming second in the Super Overs,” Williamson said at the post-match press conference.

“Throughout the game, whenever there is a Super Over, as a batting side chasing a score that was very competitive, there are a lot of positives to take out of it. Kane Williamson’s latest tryst with the Super Over came on Sunday night when his team Sunrisers Hyderabad failed to achieve the desired result in its IPL match against Delhi Capitals. Image: Sportzpics for IPL

“It is really uncanny in game of cricket that things can end in a tie but I suppose it is very, very exciting. A lot of positives, we move on really quickly to Delhi,” he added.

Williamson has been a part of a few Super Overs, with the most famous being the 2019 World Cup final, which England won on the boundary-countback rule.

Against DC here, SRH equalled their opponents’ score of 159 but the duo of Williamson and David Warner could only make seven runs in the ensuing Super Over, which did not prove to enough for victory.

In the regulation match, Williamson struck an unbeaten 66 off 51 balls.

“It is a game of very small margins and I think, if we are being honest, we just want to do different aspects of our game a bit better. This game, if you are able to do it, then the result can change quite quickly.

“I suppose when it ends in a tie, you can look at the one run throughout the whole innings. I think on the whole, a lot of positives.”

However, barring Jonny Bairstow’s 38 at the top of the order, Williamson did not get any support from the other end until Jagadeesha Suchith came in a smashed a six-ball 14 to help tie the game.

“You know there were a lot of valuable partnerships in the innings and we lacked a bit of momentum because that was the nature of the surface.

“We got very close, some positives to build on. We do not know how the surfaces will be in Delhi.”

SunRisers Hyderabad are currently placed seventh in the standings with 2 points from five matches.

SRH will next take on Chennai Super Kings in Delhi on Wednesday.