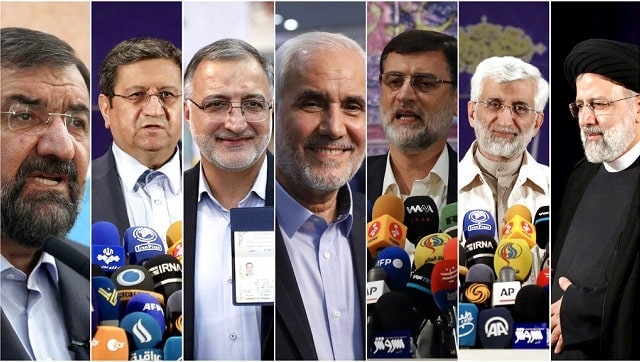 Most prominent among candidates is judiciary chief Ebrahim Raisi, who is linked to mass executions in 1988, with opinion polls showing his anti-corruption campaign drew Iranian support 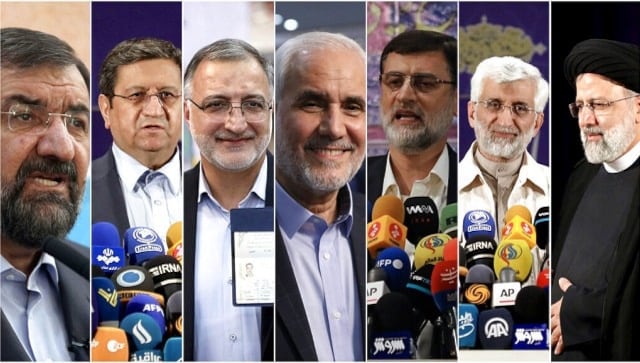 Iran named the hard-line cleric running its judiciary and six others Tuesday as approved candidates in its June 18 presidential election, barring prominent candidates allied with its current president amid tensions with the West over its tattered nuclear deal.

The announcement carried by state television puts judiciary chief Ebrahim Raisi, who is linked to mass executions in 1988, in the dominant position for the upcoming vote. He’s the most-known candidate of the seven hopefuls, with opinion polling previously showing his anti-corruption campaign drew Iranian support. He’s also believed to be a favorite of Iran’s 82-year-old Supreme Leader Ayatollah Ali Khamenei.

Most prominent among candidates is judiciary chief Ebrahim Raisi, who is linked to mass executions in 1988, with opinion polling showing his anti-corruption campaign drew Iranian support

But perhaps most notable was who Iran’s Guardian Council barred from running. Chief among them was former parliament speaker Ali Larijani, a conservative who allied with Rouhani in recent years. Larijani had been positioning himself as a pragmatic candidate who would back Rouhani’s signature 2015 nuclear deal with world powers. Diplomats in Vienna are now trying to negotiate a return of both Iran and the US to the agreement.

“I have done my duty before God and the dear nation, and I am satisfied,” Larijani wrote on Twitter. “Thank you to all those who expressed their gratitude and I hope you will participate in the elections for the promotion of an Islamic Iran.”

Ali Motahari, Larijani’s brother-in-law and a former lawmaker, separately wrote on Twitter that the Guardian Council rejected him because his daughter lives in the U.S.

Within Iran, candidates exist on a political spectrum that broadly includes hard-liners who want to expand Iran’s nuclear program and confront the world, moderates who hold onto the status quo and reformists who want to change the theocracy from within. Those calling for radical change find themselves blocked from even running for office by the Guardian Council, which also refuses to allow women to run, citing Iran’s constitution.

Also barred Tuesday was former hard-line President Mahmoud Ahmadinejad. Ahmadinejad ignored a warning from Khamenei in 2017 and registered, only to be rejected then as well by the Guardian Council, a 12-member panel under Khamenei. Ahmadinejad maintains a following in Iran due to his populist policies and has threatened to boycott the election if he wasn’t allowed to run.

During an earlier session of parliament Tuesday, lawmaker Ahmad Alirezabeigi described Ahmadinejad’s home as being “under siege” by security forces since the day before. He also warned that the decision would suppress turnout. Iran’s theocracy since its 1979 Islamic Revolution has based its legitimacy in part on turnout in elections.

“I consider the disqualification by the elites is a serious threat to widespread participation and fair competition by all political parties, especially reformists,” Jahangiri wrote on Instagram.

State TV earlier quoted Abbas Ali Kadkhodaei, the spokesman of the Guardian Council, as saying “only seven” had been approved out of some 590 who registered by the panel of clerics and jurists overseen by Khamenei. In 2017, 1,630 hopefuls registered to run.

Raisi wrote on Twitter — a service technically banned by Iran since the 2009 unrest that surrounded Ahmadinejad’s disputed re-election — that he wanted authorities to reconsider the decision to bar some of the candidates.

“I have made contacts and I am holding consultations to make the election scene more competitive and participatory,” he said, though the disqualifications Tuesday only boosted the likelihood of him taking the presidency.

As the head of the judiciary, Raisi oversees a justice system in Iran that remains one of the world’s top executioners. United Nations experts and others have criticized Iran for detaining dual nationals and those with ties abroad to be used as bargaining chips in negotiations with the West.

Then there’s the 1988 mass executions that came at the end of Iran’s long war with Iraq. After Iran’s then-Supreme Leader Ruhollah Khomeini accepted a U.N.-brokered cease-fire, members of the Iranian opposition group Mujahedeen-e-Khalq, heavily armed by Saddam Hussein, stormed across the Iranian border in a surprise attack.

Iran ultimately blunted their assault, but the attack set the stage for the sham retrials of political prisoners, militants and others that would become known as “death commissions.” Some who appeared were asked to identify themselves. Those who responded “mujahedeen” were sent to their deaths, while others were questioned about their willingness to “clear minefields for the army of the Islamic Republic,” according to a 1990 Amnesty International report.

International rights groups estimate that as many as 5,000 people were executed, while the Mujahedeen-e-Khalq puts the number at 30,000. Iran has never fully acknowledged the executions, apparently carried out on Khomeini’s orders, though some argue that other top officials were effectively in charge in the months before his 1989 death.

Raisi, then a deputy prosecutor in Tehran, took part in some of the panels at Evin and Gohardasht prisons. A tape of a meeting of Raisi and his boss meeting prominent Grand Ayatollah Hossein Ali Montazeri leaked out in 2016, with Montazeri describing the executions as “the biggest crime in the history of the Islamic Republic.”

Raisi never publicly acknowledged his role in the executions while campaigning for president in 2017. After his loss, Khamenei appointed him as head of the judiciary in 2019.