The Freedom Rides Movement of 1961 started in Washington, DC by 13 men and women who travelled to the South by bus and train to force desegregation of interstate transportation facilities. 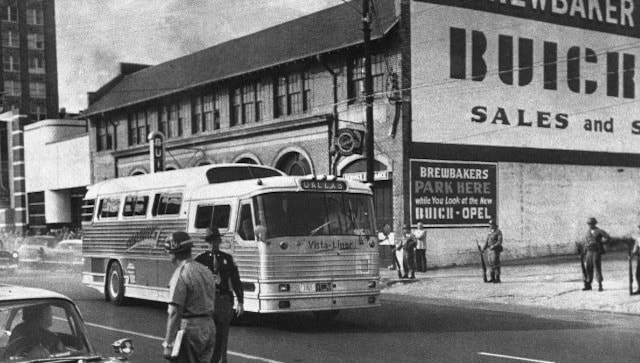 In this 15 May 1961 file photo, a bus bearing Freedom Riders leaves the station as they resumed their rides through the South in Montgomery, Ala. AP Photo

Nashville, Tennessee: Jimmy Allen Ruth, the Trailways bus driver for the 1961 group of Nashville Freedom Riders, has died, his family said. He was 83.

Driving the Freedom Riders from Nashville, Tennessee to Jackson, Mississippi was “one of his greatest accomplishments,” his family wrote in an obituary. Ruth’s bus-driving memorabilia is currently on display at the Tennessee State Museum.

The Freedom Rides Movement of 1961 started in Washington, DC by 13 men and women who travelled to the South by bus and train to force desegregation of interstate transportation facilities. The bus rides sparked bombings and beatings by white mobs, as well as imprisonment for many of the Black and white riders. However, the movement also brought about the eventual end of segregated transportation in the South.

The rides all took place during the first year of John Kennedy’s presidency in an attempt to grab the attention of the Kennedy administration in its early months.

More than 4,000 people, ranging in age from 14 to 61, participated in the Freedom Rides,. In June, July, August and September of 1961, more than 60 Freedom Riders travelled across the South, most of which ended in Mississippi, according to a history documented on Swarthmore College’s website.

When some of the passengers decided to travel to Jackson, Mississippi, every Trailways driver turned down the job except Ruth, who was white and 23 at the time, wrote Bobby Ruth, his brother, and Blondell Strong Kimbrough, his friend, in a news release.

“He agreed to drive the students and never asked any questions although he was aware of the risks involved,” the release stated. “Ruth was willing to aid in the cause for freedom and justice at all cost.”

The college-age Freedom Riders who set out from Nashville into the Deep South included Diane Nash, the late US Rep. John Lewis and CT Vivian. Lewis, a civil rights icon who died last year, was arrested in Jackson and was held at the infamous Mississippi State Penitentiary at Parchman.

“With no regrets of his earlier decision, he expressed great gratitude for being honoured and continued to bubble with pride for what he considered to be a small gesture and learned later how significant a contribution he had made to the history of the civil and human rights movement during the early sixties,” Kimbrough and Bobby Ruth wrote.

Ruth continued to drive trucks for Jack Johnson and Continental Bus until he was forced to stop because of an accident in 1963.

Ruth died while hospitalised at Saint Francis Hospital-Bartlett in Bartlett, Tennessee, on Wednesday. His funeral is scheduled for 8 June.