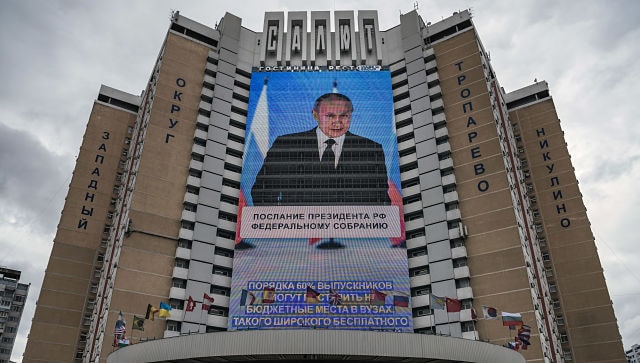 Vladimir Putin warns West of a Russian ‘red line’ that Joe Biden and others will regret crossing-World News , Technomiz”

Putin delivered an annual address replete with threats against the West but, despite tensions with Ukraine, stopped short of announcing new military or foreign policy moves

Moscow: He warned ominously of “red lines” in Russia’s security that, if crossed, would bring a powerful “asymmetric” response. He reminded Western leaders once again of the fearsomeness of his country’s modernised nuclear arsenal. And he boasted of Russia’s moral superiority over the West.

Yet even as President Vladimir Putin lashed out at foreign enemies real or perceived in a state-of-the-nation speech Wednesday, tens of thousands of Russians defied a heavy police presence to pour into the streets to challenge his rule. In Moscow, some gathered across the street from the Kremlin to chant, “Go Away!”

It was a snapshot of Russia in the third decade of Putin’s rule: A leader facing an increasingly angry and desperate opposition but firmly in power with his country’s vast resources and huge security apparatus at his disposal.

Faulted for a lagging response to the coronavirus

and with his popularity ratings declining, though still high, the Russian leader used the address to outline a vision for Russia as it emerges from the pandemic, one that promised numerous new economic subsidies but was silent about political rights.

And in recent weeks, he has seemingly fallen back on a tried and true tactic to bolster his fortunes: fanning nationalist flames.

He has ordered an enormous troop buildup on Russia’s border with Ukraine and has gone toe to toe with President Joe Biden, who issued a new round of sanctions last week, undeterred by Putin’s sabre-rattling in Ukraine.

Putin portrayed Russia as harried by western nations for years with hypocritical criticism and sanctions. Punishing Russia, he said, has become a “new sport” in the West, and he was running thin on patience.

While he pledged Wednesday that he still wanted “good relations with all participants of international society,” he said that if Russia is forced to defend its interests from any security threats its response would be “fast and tough.”

But there were signs that a public wearied after two decades of Putin’s rule was increasingly tuning him out. That was evident on the streets of Russia’s cities Wednesday evening, as rallies to protest the prison treatment of the prominent Opposition leader Alexei Navalny seemed to be mushrooming into something more.

Chanting “Freedom for political prisoners!” and “Down with the czar!” demonstrators gathered across Russia’s 11 time zones, a showing that mirrored the nationwide turnout at a wave of protests in January.

Thousands were arrested at those protests this winter, which came after Navalny’s return to Russia from Germany, where he had been treated for poisoning with a chemical weapon.

Riot police officers were out in force Wednesday. While it appeared that they sought to avoid scenes of brutality that could cast a shadow over Putin’s speech, the police did detain nearly 1,500 demonstrators nationwide. Putin delivered an annual address replete with threats against the West but, despite intense tensions with Ukraine, stopped short of announcing new military or foreign policy moves. By Sergey Ponomarev © 2021 The New York Times

Protesters stood on the sidewalks across the street from the exhibition hall next to the Kremlin where Putin had spoken a few hours earlier. They chanted “Go away!” — referring to Putin; and “Release him!” — referring to Navalny.

“I didn’t come out concretely because of Alexei Navalny, I came out more for myself,” said Svetlana Kosatkina, a 64-year-old real estate agent. “I can’t stand this whole situation of lawlessness and just total humiliation.”

On a hunger strike and said by his lawyer to be near death, Navalny this week wrote in a letter to his allies that he had grown so thin he resembled a “skeleton walking, swaying in his cell.”

Putin’s speech was closely watched for hints of his intentions in Ukraine, after massing the largest military force on the border since the outset of Kyiv’s war with Russian-backed separatists seven years ago.

Putin made no reference to the military buildup near Ukraine, but he had plenty of words for western leaders, presumably aimed mostly at Biden.

“The organisers of any provocations threatening the fundamental interests of our security will regret their deeds more than they have regretted anything in a long time,” Putin told a hall of governors and members of Parliament. “I hope no one gets the idea in their head to cross the so-called red line with Russia — and we will be the ones to decide where it runs in every concrete case.”

While Putin’s rally-around-the-flag remarks on security grabbed the most attention, he devoted the bulk of his address to domestic concerns, listing a raft of new social programs, such as subsidies for children’s summer camps and child support for single parents.

pandemic better than other nations. He outlined plans to shore up the medical system, including by sending new diagnostic equipment to hard-hit regional hospitals. He made no mention of the death toll in Russia, which by some estimates has been the highest per capita in the world.

“For our entire history, our people triumphed, overcoming challenges thanks to their singular cohesion, their spiritual and moral values that in a number of countries are forgotten, but we on the contrary have strengthened,” Putin said.

The speech came as the first, lengthy retort to the Biden administration’s imposition of sanctions against Russia this month. Those were intended to penalise Russia for numerous past actions, including its meddling in United States elections, the “SolarWinds” hacking of government agencies and corporations, various disinformation efforts and earlier military interventions in Ukraine.

Putin’s allies had also erupted in fury when Biden in an interview last month agreed with a characterisation of Putin as a “killer.” In Wednesday’s speech, Putin lingered on a grievance that has not gained much traction outside Russian state news media: an accusation that the CIA had been plotting an assassination of its own, targeting President Alexander Lukashenko, the leader of Belarus, a Russian ally.

Over the weekend, Russia’s domestic intelligence agency, the Federal Security Service, arrested two men who it said had coordinated with US and Polish intelligence agencies to plot the murder of Lukashenko. This, Putin said, “crossed all the boundaries.”

In Putin’s telling, Russia, far from pursuing a militaristic policy, has been the victim of a western scheme to contain and hobble the country.

“They attack Russia here and there without any reason,” Putin said. He cited Rudyard Kipling’s novel Jungle Book with a comparison of the United States to Shere Khan, a villainous tiger, nipping at Russia.

And Putin lingered on descriptions of Russia’s modernized arsenal of atomic weapons. These include a hypersonic cruise missile, called the Dagger, and a nuclear torpedo, called the Poseidon. The torpedo, Russian officials have said, is designed to set off a radioactive tsunami.

The foreign policy message was a stark warning, said Andrei Klimov, deputy chairman of the Committee on Foreign Affairs in the Russian Senate.

“We aren’t joking any longer,” Klimov said. “We won’t every day tell our opponents they will be punished. But when it comes, they will understand.”