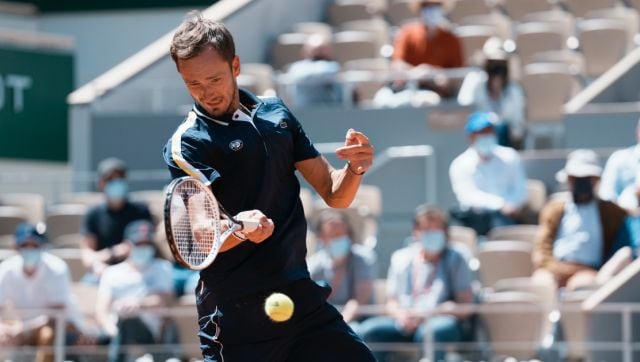 Daniil Medvedev knocked out of Halle by Jan-Lennard Struff in 1st round; Alexander Zverev starts with win-Sports News , Technomiz

Having ousted Medvedev, this year’s Australian Open finalist, Struff will play American qualifier Marcos Giron in the second round. Berlin: World No 2 Daniil Medvedev was a first-round casualty at the ATP grass court tournament in Halle on Tuesday as he suffered a shock defeat to German Jan-Lennard Struff.

“This is the biggest win, rankings wise, of my career and to do it here on home soil is very special. I only live an hour from here,” said Struff, 32, after his first career win over Medvedev at the fourth attempt.

Having ousted Medvedev, this year’s Australian Open finalist, Struff will play American qualifier Marcos Giron in the second round.

The German said his run to the last 16 of Roland Garros, where he lost to Diego Schwartzman over three sets, boosted his confidence.

Struff is hoping for another good run at a home event after reaching the final of the Munich tournament on clay in May.

Swiss tennis ace Roger Federer, who turns 40 in August, will play 20-year-old Felix Auger-Aliassime in the second round after the Canadian’s 6-3, 7-5 first-round win over Hubert Hurkacz of Poland.

Third-seed Alexander Zverev was pleased with his first match this season on grass as he dispatched fellow German Dominik Koepfer with a 6-4, 3-6, 6-3 win.

“That wasn’t bad for only two days preparation, but I still want to find my rhythm,” Zverev told Eurosport.

The World No 6 will play Ugo Humbert of France in the second round.

Fourth seed Andrey Rublev played his first game on grass for two years as he beat his doubles partner Karen Khachanov 6-3, 7-6(7/5) in the first round.

South African Lloyd Harris will face Slovakian qualifier Lukas Lacko in the second round after knocking out eighth-seeded Frenchman Gael Monfils for a 6-4, 6-4 win.

Kei Nishikori of Japan will play Sebastian Korda of the USA in the next round after a hard-fought 6-3, 2-6, 6-2 win over Ricardas Berankis of Lithuania.