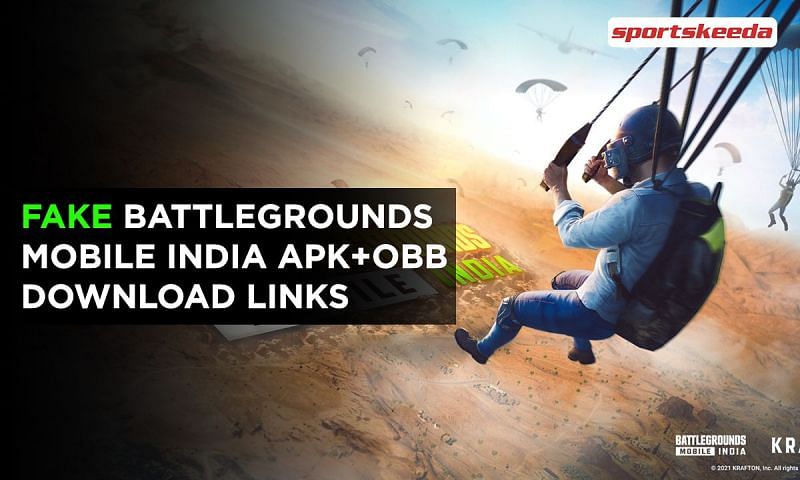 The title, developed by Krafton Inc, claims to provide an AAA multiplayer experience on mobile devices.

APK and OBB file download links for Battlegrounds Mobile India have been circulating online since its official announcement on May 6, 2021.

However, players must note that all these files are fake and can cause harm to their Android devices.

The internet has recently been flooded with fake Battlegrounds Mobile India download links.

All these links are obviously fake since Krafton is yet to even announce the game’s release date.

Furthermore, the South Korean company has revealed there will be a pre-registration period before the game’s release. Details about this phase are yet to be made public.

Such fake APK and OBB files must never be downloaded or installed as they pose a severe security risk. They could contain viruses and spyware that can steal private data and damage a player’s Android device.

Players must, therefore, never download such fake files. Instead, they should wait for Krafton to announce the game’s availability.

Changes in the Indian version

Battlegrounds Mobile India is set to have special tournaments and leagues. This will go a long way in promoting the game’s esports scene in India.

Restrictions on players under 18 years of age

Numerous restrictions will be put in place for players under 18 years of age. This includes a maximum of 3 hours of game time and an in-game spending limit of 7000 INR.

In a recent blog post, Krafton revealed that Microsoft Azure has been used in Battlegrounds Mobile India to strengthen data security and privacy.

The game’s privacy policy also states that the data will be stored and processed on servers located in India and Singapore.