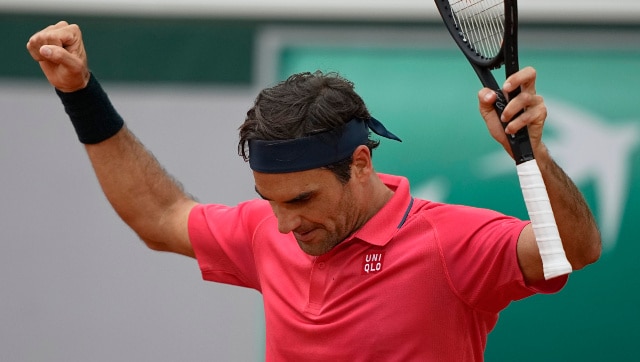 Federer stayed on course for a quarter-final showdown with Djokovic but only after becoming entangled in a rare running dispute with the chair umpire.

Paris: Novak Djokovic and Roger Federer both reached the French Open third round for the 16th time on Thursday as the battle for the women’s title was thrown wide open after world number one Ashleigh Barty limped out.

“I stayed concentrated. I thought the third set was very difficult for me because he lifted the level of his game,” said the world number one after his 350th Grand Slam match in which he fired 32 winners.

Federer stayed on course for a quarter-final showdown with Djokovic but only after becoming entangled in a rare running dispute with the chair umpire.

Federer was handed a time violation by umpire Emmanuel Joseph at 1-3 down in the second set for taking too long between points.

“I don’t even dare to go my towel anymore,” he said to Joseph.

Federer, the oldest man in the draw at 39, continued to lose his cool and the set before recovering to defeat former world number three Cilic.

“I had very good moments, in the tie-break in particular, and I served really well to finish,” said Federer after hitting 47 winners.

Playing in only his second French Open since 2015, Federer goes on to face Germany’s 59th-ranked Dominik Koepfer.

No sweat ?@DjokerNole closes out his 350th Grand Slam match with an ace, cruising past Cuevas 6-3, 6-2, 6-4. A 3R meeting with Berankis awaits. #RolandGarros pic.twitter.com/eQK1qH9CF5

The Australian, who won the title on her last visit to Roland Garros in 2019, left the court for medical treatment after losing the first set 6-1.

She then called it quits at 2-2 in the second set on Court Philippe Chatrier.

“It’s heartbreaking,” Barty said. “It’s a miracle I got past the first round.” 2019 French Open champion Ashleigh Barty waves to the crowd after retiring hurt from her second round clash against Magda Linette. AP

Third-ranked Simona Halep, the 2018 French Open winner, withdrew before the event with injury.

However, schedulers have handed the Spaniard the evening session, meaning no fans on site as the match clashes with a 9pm COVID-19

Gasquet won his first junior clash against Nadal at the Petits As tournament in France in 1999.

Sadly for him, that was as good as it would ever get.

On the ATP Tour, Nadal has monopolised their head-to-head and leads 16-0.

However, ninth seed Karolina Pliskova exited at the hands of 2018 runner-up Sloane Stephens as the 59th-ranked American won 7-5, 6-1.

Carlos Alcaraz, 18, on Monday became the youngest player to win a match at Roland Garros since Djokovic in 2005.

If the Spaniard beats 28th seed Nikoloz Basilashvili Thursday, he will be the youngest man to reach the French Open last 32 since Andrei Medvedev in 1992.

Swiatek has hit with Nadal this week, a meeting which made her so nervous that the Pole prepared a list of helpful conversation starters should she get tongue-tied.