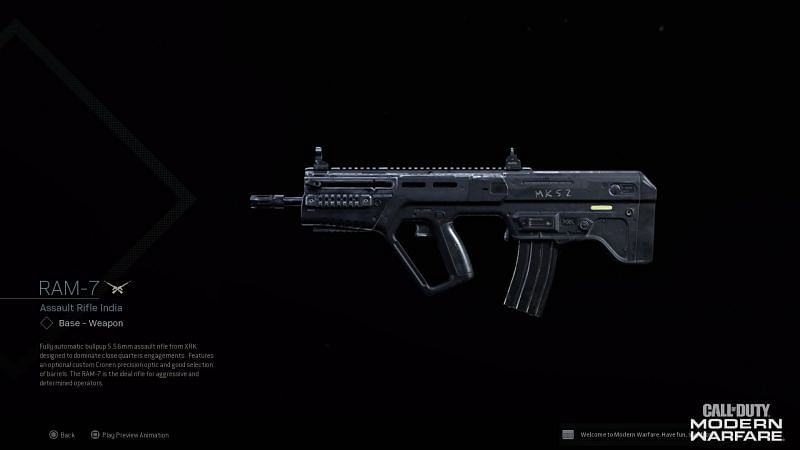 In terms of assault rifles in Call of Duty Warzone, the RAM 7 can play almost like an SMG with the right loadout.

The prominent, yet underrated feature about the RAM 7 is its incredibly fast TTK (time to kill). This gun can fire off bullets at extremely high speeds.

Any player equipped with this gun alone is going to win lots of gunfights in Warzone. This loadout, though, will significantly ramp up the RAM 7’s performance.

The Monolithic Suppressor is one of the most popular muzzles in Warzone, and with good reason too. It can leave the user off enemy radars while being fired, but its real benefit is that it increases the RAM 7’s damage range.

The FSS Ranger is typically good on SMGs and faster assault rifles like the RAM 7. This barrel increases bullet velocity, which will help the gun fire off bullets at a much higher pace. Users of the RAM 7 will want to get that quick bullet firing to drop enemies with minimum fuss.

One drawback of the RAM 7 is that the recoil is a little weird. Instead of the typical left to right recoil in Warzone, the RAM 7 recoils from right to left, which can be a little unsettling to get used to. Therefore, the Commando Foregrip is there to lower the effect of this recoil and give players less of a learning curve.

Yes, this might hurt the user’s mobility somewhat, but the 50 Rnd attachment is still worth it. With any gun that has a large fire rate, it’s better to just give it as much ammunition as possible.

The Corp Combat Holo Sight is going to be great for short distance gun fights. It lowers the time it takes to aim down sights, which could give players in Warzone the split second necessary to get the jump on the opponent. With the RAM 7, it’s only going to take a couple seconds to pick up the kill.