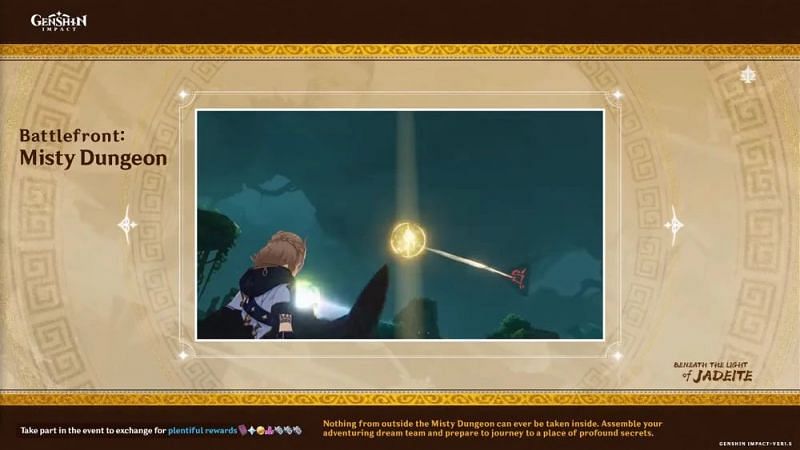 The Genshin Impact Energy Amplifier Initiative event is currently underway, but this is just one of several planned for the course of version 1.5.

Midway through May, players will begin to access new events in their constant hunt for rewards. The latter part of the month seems booked full of new events, so players are sure to be very busy in the last few weeks ahead of the 1.6 update.

Also read: Genshin Impact 1.6 leaks hint at new outfits for the characters in the upcoming version

One confirmed event for 1.5 is “Battlefront: Misty Dungeon,” where players will challenge sixteen trials to get massive rewards.

Players will complete these trials to activate the Ancient Runes and must activate all of them within the time limit to enter the final challenge. Players will also have to be weary of some automated defense systems that deal elemental damage, but can be deactivated via elemental reactions.

There are a few rules players can expect for this upcoming event. Most notably, players won’t actually use their own characters in this event. Each trial has a set of pre-built characters to select from.

In addition, elemental resonance is absent in this event. That is to say, players won’t receive any buffs for having two of any Vision in their party. Players should instead focus on characters’ skills and how they will work together when building a team.

Just like in the Spiral Abyss, characters can’t eat during this event, meaning that players should be very careful when building their trial teams. A healer or shield support character can help make up for the lack of food.

A familiar NPC will make an appearance in the upcoming “Mimi Tomo” event. One of the strangest creatures in the game, Wei the Unusual Hilichurl, will be the target of the Traveler’s investigations.

Travelers will work alongside Ella Musk to investigate and catch Wei. To do so, the Traveler will go with Ella to speak with Hilichurls. After deciphering their language and delivering what they ask for, the Hilichurl will hint at Wei’s location.

For fans of the new Housing System, this event should be especially promising, as Liyue-themed Furnishing Blueprints will be given as rewards.

Windtrace is another multiplayer event coming to Genshin Impact, and the co-op feature is of course nothing new when it comes to the game’s events. However, Windtrace is a little special as it will be the first PvP event in the game.

In this event, players will play a game in which they are split into two groups: the Rebels and the Hunter. This game is a Mondstadt tradition where the Rebels represent members of an ancient resistance, and the Hunter has been sent by an ancient aristocracy to oppose them.

For gamers who’ve grown familiar with prop-hunt games, Windtrace should be right up their alley. The Rebels in this game must evade capture from the Hunter until the timer stops. They can also disguise themselves as nearby objects like crates and barrels while they avoid the Hunter.

Participating in limited-time events is a great way to farm for rewards and experience Genshin Impact in a new way, and players are sure to have a lot of content to work with in just a few short weeks.