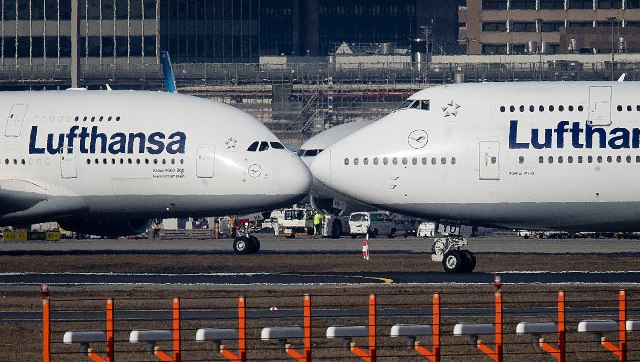 US, EU arrive at deal to ease dispute between Boeing and Airbus; an overview of the controversy

With this, an epic 16-year-old dispute over support for airplane makers appears to be heading for an end, at least for now An Airbus A380, left, and a Boeing 747, both from the Lufthansa airline pass each other at the airport in Frankfurt, Germany. AP

The United States and the European Union on Tuesday arrived at a deal to end their long-running rift over subsidies to Boeing and Airbus.

With this, an epic 16-year-old dispute over support for airplane makers — said to be the largest ever corporate trade dispute — appears to be heading for an end, at least for now.

The deal will ease trans-Atlantic tensions, and will let the two sides focus on a common economic threat: China. It goes a long way toward repairing a huge commercial relationship — $933 billion in two-way trade last year despite the pandemic — that came under enormous strain during the Donald Trump years.

Here are the key points from the dispute and why it was so important.

What was the dispute over?

Since 2004, the US and the EU have accused each other of unfairly subsidizing their aircraft-building giants — America’s Boeing and Europe’s Airbus. In that year, Washington terminated a 1992 US-EU agreement covering support for Airbus and Boeing. Subsequently, the EU filed a complaint with respect to US aid for Boeing, as noted by Reuters.

In 2005, the World Trade Organisation launched twin probes into public support for Boeing and Airbus after bilateral negotiations failed. Later, in 2009, the WTO issued an interim ruling that some European aid provided to Airbus violated a ban on export subsidies – a type of aid deemed most harmful and therefore automatically banned.

In 2011, however, a separate WTO panel partially backed the EU in its counter-case alleging $19 billion of support for Boeing from the US government, NASA and various states and municipalities, and ruled against aid for Boeing worth at least $5.3 billion.

Over the past two years, the World Trade Organization, which adjudicates such disputes, declared both sides guilty. It allowed the United States to impose up to $7.5 billion in tariffs and the EU up to $4 billion’ worth.

The tit-for-tat duties victimized companies that have nothing to do with aircraft production, from French winemakers and German cookie bakers in Europe to spirits producers in the United States, among many others.

In March, weeks after Biden took office, the two sides agreed to suspend the tariffs imposed as part of the dispute. That suspension, which began 11 March, was to last for four months. The agreement announced Tuesday will officially take effect 11 July and will put the tariffs on hold for five years.

Negotiated in marathon talks by EU and US officials, the truce was formalised in Biden’s summit with European leaders Charles Michel and Ursula von der Leyen, who hosted him in Brussels.

European countries are trying to clear the slate of trade disputes to consolidate a more friendly phase and jointly tackle other issues, which also include curbing big tech and handling Russia.

A European official was quoted as saying by AFP that both sides had been “sweating” to find common ground ahead of the meeting and give a clear sign that Trump-era battles will soon be behind them.

A report in The Associated Press quoted William Reinsch, a former US trade official who is now an analyst at the Center for Strategic and International Studies, as saying, “It’s obviously a good sign — they agreed to something.”

But Reinsch noted that the two sides “kind of kicked the can down the road,’’ by leaving unsettled some issues in the aircraft dispute, such as whether Airbus must repay the government subsidies it received over the years. Instead, the US said in a fact sheet, the two sides had agreed to establish a group “to analyze and overcome any disagreements that may arise.’’

On the whole, Tuesday’s agreement made clear that the United States and the EU recognise that Boeing and Airbus face an external threat far bigger than each other. China, as part of its aggressive drive to become the world’s dominant industrial power, is intent on developing its own plane-making industry with heavy government support.

The US and EU have agreed to work together to counter Beijing’s efforts to obtain foreign aviation technology. They plan to take joint action against unfair trade practices that appear intended to give Chinese plane manufacturers unfair advantages.

Richard Aboulafia, an aerospace analyst with Teal Group, was quoted as saying by The Associated Press that the agreement will help the US and Europe pivot to present a united front against China. He noted that Chinese airlines delayed deliveries from Boeing and Airbus during the pandemic but continued to take deliveries from China’s own aircraft manufacturer, COMAC.

Outlook for the future

The deal might help solidify the duopoly of Airbus and Boeing, which together dominate the global market for airline jets. Both companies have struggled recently with declining orders and deliveries at a time when the pandemic devastated air travel and led airlines to cancel or delay purchases.

Once the shock of the pandemic is behind the two giants, Airbus seems better placed for the recovery in the market.

Airbus is also due to launch its A321 XLR in two years, an aircraft able to cover the kind of routes hitherto only managed by big long-haul carriers.

The new plane has already had a very positive response from clients.

Boeing, which does not have an equivalent plane, is still suffering fall-out from the grounding of its 737 MAX, and must sell aircraft it has already produced before it can increase its production rates.