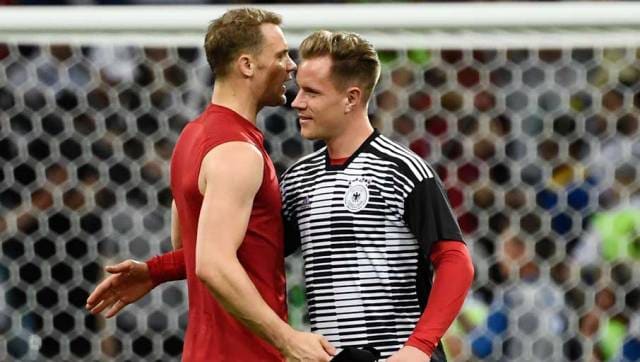 Watch the best saves from the last edition of European Championships-Sports News , Technomiz

While the Euros are known to offer a showcase of some flashy goals, the world’s best shotstoppers are also on the field, wanting to make a mark. Watch the top saves from the previous edition: In under 24 hours from now, the world’s eyes will again be trained on Europe. For, some of the best national teams in the world will go toe-to-toe in the 16th edition of the European Championships.

While the Euros are known to offer a showcase of some flashy goals, the world’s best shotstoppers are also on the field, wanting to make their mark. As we count back to Euro 2020, here’s a look at the top saves from the previous edition:

Sommer pulls off a stunner

In a group stage game between Albania and Switzerland at Euro 2016, Shkelzen Gashi found himself with the ball at his feet and no defender in his vicinity. With only the Swiss goalkeeper to beat, Gashi entered the box and lined up a shot. That’s when Switzerland goalkeeper Yann Sommer rushed out and parried the ball away, much to the surprise of everyone watching and the utter dismay of Gashi.

In the group stage game between England and Russia, Danny Rose burst into the Russian box and put in a laser-guided cross from the left flank. The ball rolled kindly into the feet of an onrushing Wayne Rooney, who connected so sweetly that his shot beat the feet of two lunging defenders. The ball was making its way into the Russian goal when Igor Akinfeev dove to his right and pushed the ball out.

Germany’s Manuel Neuer has made a reputation for himself for being a sweeper-keeper, who is pretty nifty with his feet. But in Germany’s group stage match against Ukraine, he got a chance to show that he can do magic with his hands too. A shot from Yevhen Konoplyanka was flying into the German goal when a flying Neuer palmed it away from goal.

Cristiano Ronaldo floated in a pinpoint cross. Nani rose above the defender marking him and connected perfectly with his header. The ball should have gone into the goal, but for Hannes Halldorsson’s foot, which averted disaster for Iceland.