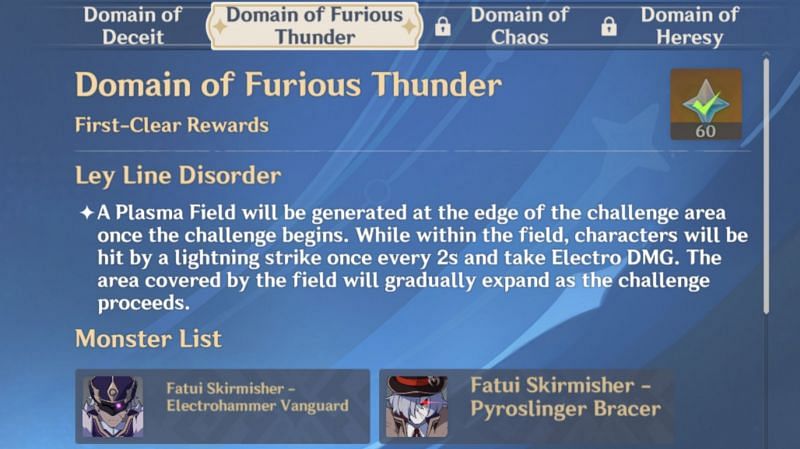 Even though the debuffs are customizable, the event has proven to be quite a challenge for a lot of players. The Genshin Impact fanbase is split between those who enjoy the challenge and those who demand more casual play. It appears that this event will leave a bad mark on some players, just like the Hypostatic Symphony did.

The second domain of the event is called “Domain of Furious Thunder”. Here, players will be given a small “safe zone” to play in, requiring a lot of improvisation in their gameplay.

To finish the second Twisted Realm easier, players can consider these tips:

Just like the first Act, Act II also comes with its own set of Irminsul Fruit Fragments. These fragments can be used on the Energy Amplifier, granting players various buffs that will assist them with their task in the Twisted Realm.

It is crucial for players to read the buffs and build their teams around them. The Energy Amplifier will play a tremendous part in the completion of the Twisted Realm if it is used correctly.

#2 – Don’t get out of the safe zone unless necessary

The Domain of Furious Thunder has a Plasma Field outside the safe zone. Players who step outside the field for more than two seconds will get Electro Damage. Furthermore, players can also increase the debuff of the Plasma Field, which will reduce the party’s stamina each time they take damage.

#3 – Use a bow character or other long-range attackers

To handle enemies in the Plasma Field, players are recommended to use bow characters or long-range attackers. It appears that this Twisted Realm is designed to spoil Ganyu users as the obtained fragments will boost charged attacks and bow users.

ALSO READ: Genshin Impact Primogems guide: How to get free 990 Primogems through the Energy Amplifier event

However, if players don’t want to use bow characters, it is also possible to clear the domain using catalyst characters. For example, Ningguang can easily kill enemies outside the safe zone as her attacks are long-range.

In part three of the challenge, players have to defeat an Electro Fatui Skirmisher and two Pyro Skirmishers. To handle their shields, players will have to use Cryo and Hydro characters.

Diona is highly recommended for the Cryo application here. Not only for breaking the shield, but Diona can also create a shield, heal the party, and attack enemies outside the safe zone. As for the Hydro character, catalyst users like Barbara and Mona can easily reach the enemies in the Plasma Field. Using Barbara is a great idea as she can also tank damage if necessary.

See also  Ratchet and Clank: Rift Apart review | The boys are back in town and they truly bring the PS5 to life

Unlike the third part of the Domain of Furious Thunder, the first and second parts are filled with a hoard of enemies. To handle them effectively, players can utilize AOE crowd control like Venti’s or Sucrose’s.

However, players should remember to equip the characters with enough Energy Recharge. This is to ensure they will always have their Burst ready once the cooldown is over.

ALSO READ: Genshin Impact Noelle hangout guide (part 2): How to get all the endings in 1.5 update

Players who are struggling need to remember that they do not have to finish the challenge with a maximum score. To obtain all the rewards in the event shop, players will need 5.000 points on every challenge.

Not only that, but it’s also important to remember that this challenge can be done in Co-Op. Unlike the Spiral Abyss, players can use potions and food buffs to further enhance their fighting capabilities.