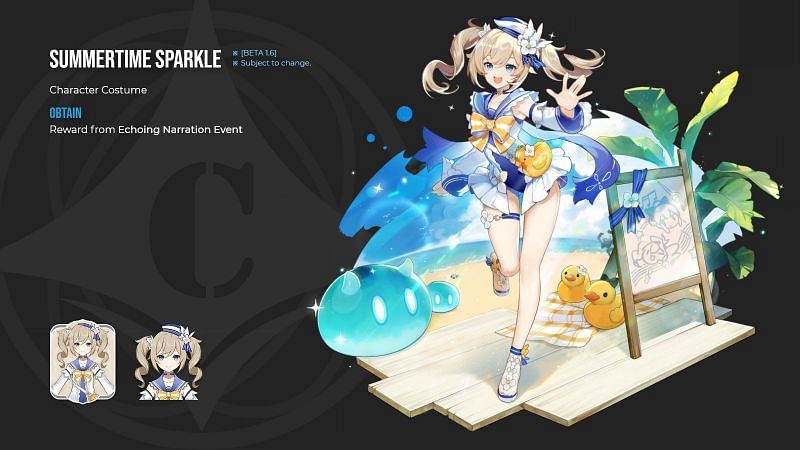 Genshin Impact is reportedly planning to introduce skins for characters in the upcoming summer event in version 1.6.

Genshin Impact fans have been requesting the developers to introduce custom skins and outfits for the characters over the past few months. Even though the developers have never denied it, the feature was not confirmed to be part of the next patch.

However, a set of new Genshin Impact leaks on Twitter reveals the leaked costumes of Jean and Barbara that will be introduced in the next update with the Summer Event.

The leaks come from ProjectCelestia, a reputed leaker and data miner in the Genshin Impact community, on Twitter. According to the leaks, Genshin Impact is reportedly working on two costumes or character skins for the next patch. The two skins will be released during the summer event in Genshin Impact 1.6 Update.

Anything is possible. We just know that it’s through some sort of shop.

The summer events and skins will be based on the upcoming region called Archipelago, where barbara’s costume “Summertime Sparkle” will be available as a free reward for completing the Echoing Narration Summer event.

Similarly, Jean’s summer event costume is named “Sea breeze Dandelion,” but the source to obtain this costume is yet to be revealed. According to a few other sources, Jean’s costume will not be available for free, and players may need to pay real money to get this skin in Genshin Impact 1.6 version.

Other Genshin Impact 1.6 leaks about skins or costumes

According to earlier leaks, Genshin Impact is likely to introduce the costume system via Alice, who happens to be Klee’s mother. Currently, there is no clarity available on the rarity of the character skins. Still, miHoYo is conducting in-game surveys to gather more feedback about character aesthetics and improve the costume system.

Players can open the routine survey message from their in-game mail to provide their views on the character skin system. Additionally, players will be rewarded with 30,000 Mora for completing the surveys in Genshin Impact 1.6 update.

According to the feedback, miHoYo might make some last-minute changes to Barbara’s skin, “Summertime Sparkle,” and Jean’s skin, “Sea Breeze Dandelion” before final release.

Relevant: Chasm region in Genshin Impact will not be released in 2021, according to new leaks