The IPPPR insisted that rich countries should provide one billion vaccines to the world’s poorest nations by 1 September. 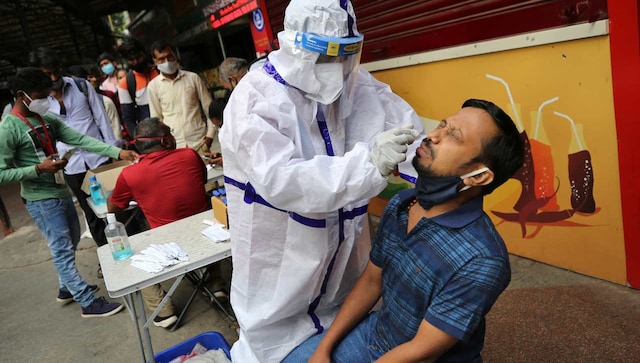 A health worker in protective suit collects nasal swab of a traveler to test for COVID-19 outside a train station in Bengaluru, India, Sunday, April 11, 2021. India is reporting a surge in infections, which according to experts is due in part to growing disregard for social distancing and mask-wearing in public spaces. (AP Photo/Aijaz Rahi)

toll in the past 24 hours, with the variant stoking the country’s surge now present in dozens of other countries across the globe. Looking back to the earliest days of the pandemic, the Independent Panel for Pandemic Preparedness and Response (IPPPR) blamed a “toxic cocktail” of dithering and poor coordination for the more than 3.3 million deaths so far and untold economic damage.

Early responses to the outbreak detected in Wuhan, China in December 2019 “lacked urgency”, with February 2020 a costly “lost month” as countries failed to heed the alarm, said the panel.

The IPPPR insisted that rich countries should provide one billion vaccines to the world’s poorest nations by 1 September.

Vaccinations have helped to ease the pandemic crisis in the United States and Europe.

The European Commission on Wednesday upgraded its economic growth forecast for this year and 2022, to 4.2 and 4.4 percent, in part thanks to faster inoculations.

Vaccine frontrunner Britain reported a 2.1-percent jump in GDP in March as it gradually emerges from lockdown.

London will nevertheless launch an inquiry next year into the handling of the pandemic by Prime Minister Boris Johnson’s government, after the UK suffered the world’s fifth-highest official toll so far at 127,000 deaths.

As governments eye a return to mass travel, Spain said it was hoping to welcome 45 million tourists this year and Germany said it would relax quarantine rules for holidaymakers returning from some EU neighbours.

Bangladesh on Wednesday took delivery of half a million doses from China.

“A friend in time of need is a friend indeed,” Bangladesh’s health minister Zahid Maleque said.

Pointing to “unwillingness to tackle inequalities” as a key factor worsening the pandemic, the IPPPR said intellectual property rights for vaccines should be waived if doses are not delivered to poorer countries by September.

But hesitancy is also limiting vaccinations in some parts of the world, with a poll showing that most people in vaccine-sceptical Russia do not want the jab.

For now India is struggling even to count the dead, with many experts saying official figures — 254,197 killed so far — may be an underestimate by several times.

India’s underfunded health system has left hospitals and crematoriums overwhelmed, and many COVID-19

deaths are not properly recorded.

There are fears that the virus is now raging in India’s vast rural hinterland where two-thirds of the population live, and where health care is patchy.

The swift spread has been blamed on huge political rallies and religious events that attracted millions of people over recent months, as well as the new B.1.617 variant first detected in India in October.

The European Medicines Agency said Wednesday that there is “promising evidence” that mRNA-based vaccines like those developed by Moderna and Pfizer-BioNTech can “neutralise” the new variant — although it is still monitoring data.

Many nations have shut their borders to travellers from India in a bid to stop the variant from reaching their shores.

But it has spread to at least 44 nations, the WHO said Tuesday, with Britain detecting the most cases of the variant outside India.

The organisation this week declared the strain a “variant of concern”, alongside three others first detected in Britain, Brazil and South Africa.

In contrast to the supply problems in Europe, the tiny Pacific nation of Nauru announced it had become the first country to have vaccinated its entire adult population of fewer than 8,000 people.

It used AstraZeneca doses supplied as part of the global Covax programme aimed at boosting immunisation in poorer nations.

But the Anglo-Swedish pharma company continues to grapple with concerns over reports of rare but serious side effects in people who have received its jab.

Norway on Wednesday said it was dropping AstraZeneca from its vaccination programme, while keeping Johnson & Johnson’s jab suspended over similar concerns.

Meanwhile Japan said it would vaccinate all its Olympic athletes ahead of the Tokyo Games, leapfrogging the general population, in a reverse of earlier promises.

“If it can really be held safely, I’d like to aim for the gold medal,” he said. “But when you look at the situation Japan is in, I have mixed feelings.”

Polls show a majority in Japan oppose holding the Games this year.

In France, organisers of the Roland Garros tennis Grand Slam said would-be spectators will have to prove they are free of COVID-19

or vaccinated before attending.