Mumbai. Music composer Anu Malik has been trolled on social media after Israel’s gymnast Dolgopayat won the gold medal at the Olympics. Users say that Anu Malik has even stolen the tune of Israel’s national anthem in a song.

The user wrote, ‘Utha le re baba’
Commenting on social media, political analyst Anand Ranganathan wrote, ‘This is true. I still can’t believe that Anu Malik has used the melody of the Israeli National Anthem in one of his songs. Take it up Baba’. On the work front, Anu Malik is currently seen in Indian Idol 12. He is judging this reality show. 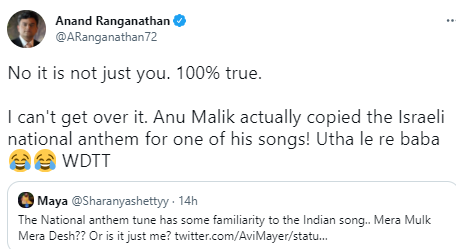 The songs of the film Diljale became very popular. Especially ‘May not be’, ‘Sham hai dhua-dhua’ is still hummed. There were a total of eight songs in the film. Kumar Sanu, Udit Narayan, Kavita Krishnamurthy lent their voices to the songs of the film.