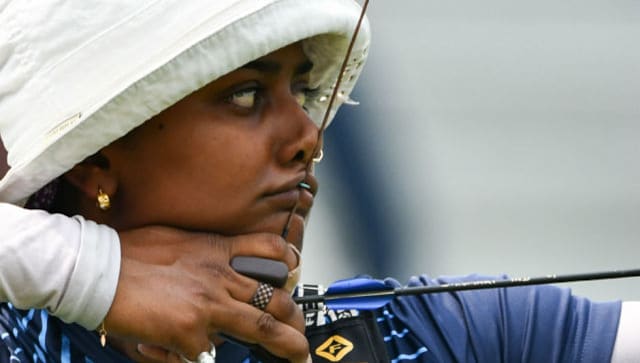 Guatemala City: Former World No 1 Deepika Kumari shot a perfect 10 in the final arrow as India scripted a stunning turnaround to defeat a fancied Mexico and grab a gold medal in the Archery World Cup Stage 1 on Sunday.

The performance rubbed off on the mixed pair duo of Atanu Das and Ankita Bhakat as they bagged a mixed pair bronze, upsetting top seed USA 6-2 with yet another fightback at Los Arcos on the day.

Returning to the World Cup after almost two years, the Indian team, who are yet to clinch an Olympic team quota, trailed 2-4 after the third set.

But the trio of Deepika, Ankita Bhakat and Komalika Bari showed perfect composure to bounce back in the fourth set before clinching the issue 5-4 (27-26) in the shoot-off en route to their first women’s recurve team gold since 2014.

In the shoot-off, Ankita started off with a nine, while the 19-year-old Komalika drifted away with an eight as it was down to Deepika versus her more fancied rival Aida Roman, the 2012 London Olympics silver medallist, in the final arrow.

The star Indian held her nerves and drilled a perfect 10 as Aida, needing a nine to prolong the shoot-off, cracked under pressure and shot eight.

This was India’s fifth recurve women’s team gold in World Cup having won it previously in Shanghai-2011, Medellin-2013, Wroclaw-2013 and 2014 with Deepika winning her fifth yellow metal.

“It feels good to win a gold medal after seven years,” Deepika said after the win.

Yet to win a team quota for the Olympics, the win will bolster their confidence ahead of the final qualification event on the sidelines of World Cup Stage 3 in Paris in June.

“I was nervous but thankfully I managed to do well. I’m sure this confidence will help us seal a team quota in Paris,” Komalika, the reigning under-18 world champion, said.

The top seeded Indians had a flying start to the final as they shot three 10s including one X (closest to the centre) to take the first set 57-56.

But the Mexican trio of Aida, Ana Vazquez and Alejandra Valencia made a spirited comeback shooting 57 in the second set to edge out the Indians by two points to make it two-all.

Aida spearheaded the Mexican challenge well and hit a perfect 10 in the final arrow of the third set to snatch 4-2 lead leaving India nothing short of a win in the fourth set.

India did not buckle under pressure and started the fourth set with Ankita drilling a perfect 10, followed by Komalika’s nine. Deepika then rounded the first set of arrows with a perfect 10 to take a two-point lead at the halfway mark.

Maintaining their consistency, the trio then shot 10-9-10 as the third seeded Mexicans cracked under pressure to lose the fourth set by five points for the ensuing shoot-off.

In the mixed pair bronze playoff, India trailed 0-2 after the first set but Das and Ankita complemented well in the second and third set to clinch the issue.

Ankita shot two of the three 10s in the second set, while Das stepped it up in the third set with two 10s to down USA.