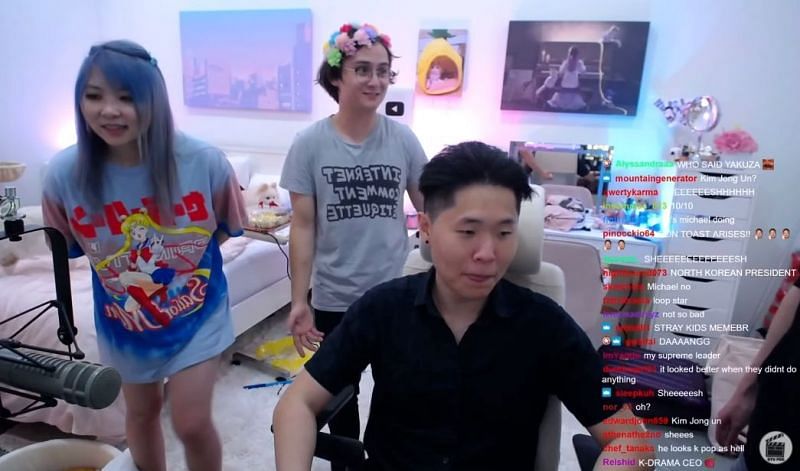 Fellow personalities and members of Offline TV Yvonne “Yvonnie” Ng, Michael Reeves and Lily “LilyPichu” Ki all got turns to style Disguised Toast’s hair. The streamer started off by styling his own hair and then invited Yvonnie to try out two hair-styles.

Yvonnie eventually ended up trying out a pony-tail, which led to a series of hilarious hair-styles that Disguised Toast reluctantly went along with. The two were joined by Michael Reeves and LilyPichu, who both tried out their own hair-styles for Disguised Toast.

The video was posted on the “OTV POG” YouTube channel on 8th May, 2021. As can be seen in the clip, Disguised Toast styled his own hair initially. However, both him and Yvonnie were not too fond of what Disguised Toast had managed and burst into laughter.

This led to Yvonnie styling Toast’s hair. Initially, the streamer decided to put two pink flower-shaped ribbons along with another blue ribbon in Disguised Toast’s hair. She appeared to be happy about the hair-style and pointed out the ribbons to the audience. However, Disguised Toast seemed distressed.

Yvonnie had only just gottenstarted and tried out another hairstyle. This time, she put a large red hair-band on Toast’s hair, which was followed by a “pony-tail” hairstyle that also featured a pink ribbon, as can be seen below.

Yvonnie then decided to pat down Disguised Toast’s hair, which made him think that he resembled Supreme Leader of North Korea, Kim Jong-Un. This was followed by an elaborate mohawk that required quite a bit of hair-gel to maintain.

Both Michael and LilyPichu joined the two internet personalities. By this time, Disguised Toast had given his friends a free hand with his hair:

However, the streamer seemed to immediately regret what he told his friends, as LilyPichu ended up putting a bunch of butterfly clips on his hair, as can be seen above. LilyPichu then decided to give Disguised Toast the “Elvis Presley” hairstyle.

This was followed by another “mad-scientist” hairstyle, after which LilyPichu and Michael Reeves took over the hairstyling. Reeves gave him the following hair-cut.

This was followed by a blow-drying session, after which Yvonnie and Reeves both concluded that the hairstyle was the “best one that they had done until then.” However, LilyPichu ended up bursting into laughter multiple times when she saw Disguised Toast’s hairstyle.

Additionally, Disguised Toast refused when he was asked if he was happy with the haircut.

The streamer eventually picked up all off the hair products that he had brought and left, looking visibly dejected. Disguised Toast has only recently come under scrutiny for allegations related to pedophilia, sexism and racism. The streamer posted a long response on Twitter. For more information about the controversy, the following article can be read.