Greece on Friday officially joined the race to woo back tourists, hoping the sun, sand and sea will lure holidaymakers after months of lockdown and bring the country a desperately needed revenue boost after last year’s miserable holiday season. 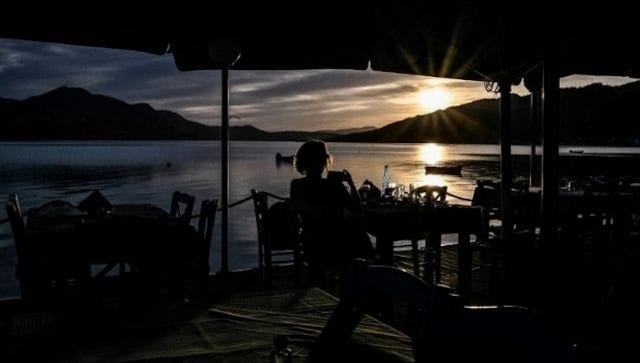 A tourist takes photograph of the sunset at a sesaside tavern of the Edipsos Baths, also known as Loutra Edipsou, on the Greek island of Eubea. AFP

“Yamas! Cheers to a good season,” says Nikiforos Karifilakis as he pours shots of ‘tsikoudia’, the strong traditional Cretan spirit, a day after Greece reopened to tourists.

His beach bar is at the very end of the famous long wide sandy beach of Falasarna on the northwestern tip of Crete.

“I’m very optimistic that everything will be fine in the end and we will survive financially,” says Karifilakis. “I get positive messages from the hoteliers. People have the need to finally go out, have fun.”

Greece on Friday officially joined the race to woo back tourists, hoping the sun, sand and sea will lure holidaymakers after months of lockdown and bring the country a desperately needed revenue boost after last year’s miserable holiday season.

Before the pandemic, Falasarna beach was famous among others for its crowded big summer parties, which will not be possible again this summer.

“The most difficult part last year was when curfew was reimposed in the middle of the tourist season and we had to close our full bar at 11 pm right at the peak of the night,” Karifilakis says.

“We hope we will avoid it this time, and all restrictions will be gradually eased.”

The pandemic has badly hit and deeply affected the Greek economy, heavily reliant on the tourism sector which accounts for more than 20 percent of GDP.

Tourism revenue plunged to 4.28 billion euros ($5 billion) in 2020 from 18 billion euros in 2019, while tourist arrivals fell 76.5 percent to just 7.4 million, according to the Greek Tourism Confederation Institute.

“We hope the season will manage to cover part of last season losses, when revenues were minimal,” the mayor of Chania Panayiotis Simandirakis told AFP.

“Together with the health authorities, we organised seminars for the employees in the tourism sector on health protocols and we also hope, as the season progresses, restrictions around the world will be eased.”

The tourists are still a rare sight here and locals are putting the finishing touches in their businesses reorganising the umbrellas and the sun-beds and cleaning their patios.

With several restrictions still in place for travellers throughout Europe, Greek hoteliers expect the tourism sector to pick up from late June or early July, alongside stronger vaccination figures.

“People finally start booking their holidays, many of them are from last year’s cancellations, but there are also some new ones,” says Konstantinos Kouratoras, who owns one of the very few hotels that have already opened in the small fishing village of Bali.

“A difficult but eventually positive season lies ahead of us, because people want to finally to travel.”

See also  Taliban sitting on a trillion dollar mineral treasury, a major cause for global concern

Ilias Karahalios, owner of a souvenir shop nearby hopes for at least 10 percent higher revenues than in 2020, when he had his worst season ever.

“If our vaccination had moved faster, maybe we would be already welcoming the British tourists,” he says.

The UK put Greece on its amber travel list, meaning that British tourists returning from a Greek vacation face at least five days in quarantine.

“Last year has been the most difficult season of the 12 years I’m in Crete and I’m expecting the same for this year,” says Michaela Raeburn, who is collecting seashells for the art-pieces she creates and sells to tourists. “It’s been really hard for the businesses here and I’m really worried. I think July, August and September will be the season here, fingers crossed.”

Vasiliki Koutraki, owner of a suites complex in Chania is feeling optimistic, as she is already almost fully booked for July, August and September.

“The islands weren’t very much affected by the decades long financial crisis, but this last winter has been really harsh,” she says.

Michalis Vlatakis, president of the Cretan travel agents hopes that by the end of May Crete will be in the “green” travel zone. “Last year we had the best epidemiological conditions compared to the rest of Greece, we managed to accommodate with safety one-fourth of the total tourist arrivals and we received laudatory comments,” he says.

Martin Jarosz from Poland is one of the few holidaymakers enjoying the turquoise waters of Falasarna with his wife and baby.

“I feel liberated,” he enthuses, promising to return later in the summer, after he completes his vaccinations.