New Pokemon Snap is the latest Pokemon game published by Nintendo and The Pokemon Company for the Nintendo Switch.

The New Pokemon Snap is a first-person photography game that requires players to click high-quality photographs of Pokemon to assist Professor Mirror and his assistants Rita and Phil on their research studies.

Even though it might sound pretty simple, clicking photographs will require utmost precision from players. Apart from that, there are simple tricks involved to lure the Pokemons out of their habitat to click the perfect picture.

After years of begging by fans online, Nintendo has released a sequel to the classic N64 game Pokémon Snap.

It’s a peaceful playthrough that has you taking pictures of Pokémon — not capturing them.https://t.co/kgKFwtV2iz

This article will elaborate on how to apply these tricks to get the perfect photo for Professor Mirror.

New Pokemon Switch was released on April 30 and has gained significant popularity within a short period of time. The game is a sequel to theemon Snap, which was developed back in 1999 for Nintendo 64.

New Pokemon Snap takes players on a journey around the Lental region to photograph Pokemon. The journey is done via an on-rail hovercraft called the Neo-One. Players will encounter various Pokemons on the journey and will need to frame them perfectly to assist the research study.

Photographs are judged on various factors and are given a rating out of four stars. A three-star and a four-star photo are considered the perfect photos for the mission. 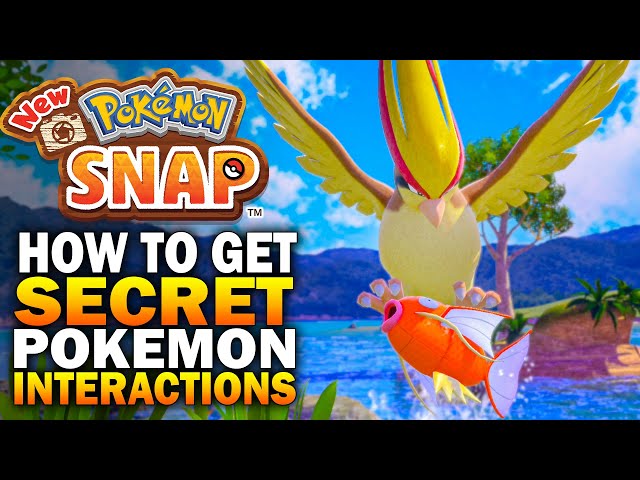 TagBackTV reveals some of the secrets to capturing hidden Pokemon interactions in New Pokemon Snap.

The first hidden interaction is with Emolga. The electric-flying type Pokemon sits comfortably with its back towards players. However, if players throw a fruit at the patch right underneath its branch, Emolga will fly down to have it.

After encountering the Emolga, players will encounter a Heracross just across the bend. The bug-fighting type Pokemon is seen latching on to a tree. Players will be required to throw a fruit towards it to knock it off the tree. Players will also have to snap it when it lands on his backside for the three-star shot.

After the fall, it’s going to perform the emote and then go over to a nearby Wurmple and pretend to attack it. This is the perfect moment to get a four-star shot.

The most difficult task is definitely getting the photo of the Pidgeot picking up a Magikarp from the nearby stream. Players will be required to hit the Pidgeot with a fruit to get it to fly. The flying type Pokemon will fly around and sit at the top of a tree overlooking the waterbody.

The moment the Pidgeot grabs the Magikarp is the perfect moment for the four-star shot. It is quite challenging as the Pidgeot comes in quite swiftly, and it might take a few tries for gamers to get the perfect shot. Players can take multiple shots of the Pidgeot flying away with the Magikarp for more pictures.

The last Pokemon with hidden interaction is the Tangrowth, which is hidden hedges. Gamers can throw a fruit high up to excite the Pokemon, and it’ll try to reach for it with its long arms. Capturing this moment will reward gamers with the perfect three-star photo.

After it consumes the fruit, the Tangrowth gets really happy. Players can capture this moment to frame a happy moment in the New Pokemon Snap.